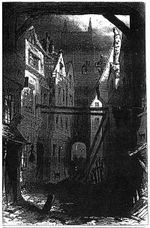 Walter Benjamin constructed the figure of the flâneur from the writings of his friend Franz Hessel, as well as Baudelaire, Poe, Balzac, Dickens and Marx in his writings on commodity fetishism. The flâneur is a historical type, as we saw in my previous post, but he is also a mode of experience, a literary motif, and a means to see into commodity culture.

Benjamin started his elaboration of the flâneur from George Simmel’s observation that “interpersonal relationships in big cities are distinguished by a marked preponderance of the activity of the eye over the activity of the ear.” For the flâneur, Benjamin writes, “the joy of watching is triumphant.”  Mostly what the flâneur watched was the city itself. Flâneurie arose at the same time as the early novels of metropolitan life produced by restless, expansive urbanites like Balzac and Dickens. In their novels the city is a landscape, alternately familiar and alienating, comforting and dangerous.

Dickens used to roam around London at night, not an entirely safe activity, and the labyrinthine mysteriousness of the city appears most directly in Bleak House. The novel’s narrator as a flâneur whose freely ranging yet penetrating gaze permits us to see what the naïve eye Esther Summerson cannot. For a moment in the remarkable chapter 48 the flâneur assumes the guise of the moon as it gazes down upon the city and illuminates the shocking murder of Tulkinghorn.

Dickens showed the late Romantic strain of the flâneur, at once fastidious and macabre. Balzac, on the other hand, revealed the flâneur’s sociological bent. Dickens dramatizes the act of looking at the city; Balzac philosophizes it.  Take, for instance, the opening lines of Balzac’s Facino Cane:

I walked the streets to observe the manners and ways of the faubourg, to study its inhabitants and learn their characters. Ill-dresses as the workmen themselves, and quite as indifferent to the proprieties, there was nothing about me to put them on their guard. I mingled in their groups, watched their bargains, heard their disputes, at the hour when their day’s work ended. The facility of observation had become intuitive with me; I could enter the souls of others, while still conscious of their bodies,–or rather, I grasped external details so thoroughly that my mind instantly passed beyond them; I possessed, in short, the faculty of living the life of the individual on whom I exercised my observation, and of substituting myself for him, like the dervish in the Arabian Nights who assumed the body and soul of those over whom he pronounced certain words.

Here is the flâneur as undercover cop. He not only passes unnoticed, he can revels in his powers of empathy. He is the perfect guide to the still new phenomenon of the large industrial city. Under his guidance we see the city as one half novel of manners, one half vast criminal conspiracy.

In Balzac and Dickens the flâneur’s powers of exacting observation and empathy remain firmly in the service of a story. Everything they observe fits into a larger whole. The figure of the flâneur assumes a more self-conscious and modernist form in Flaubert and Baudelaire. In these two writers flâneurie becomes not just simply a way of seeing, but also a way of writing.

More on Flaubert and Baudelaire and the figure of the flâneur in my next posts.