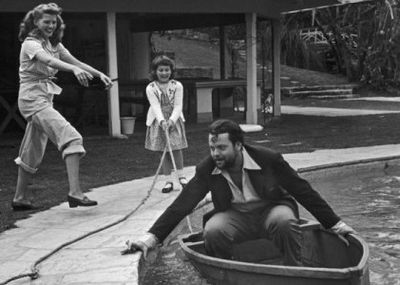 . Orson Welles led a famously messy life, but his offspring were born in orderly intervals: three marriages, each producing one daughter. Christopher (sic) Welles was the product of Welles’ first marriage to Virginia Nicolson, so her list of disappointments is the second longest (after her mother’s) of the women in Welles’s life.

Among her earliest disappointments was her failed attempt to be her father’s favorite actress. At age eight she pestered her father into giving her a bit part in The Lady From Shanghai. Welles hurriedly wrote her into the script as “an American brat eating an ice cream cone.” He later cut her scene from the movie, much to his daughter’s chagrin.

Consigned to the sidelines of her father’s life, Chris Welles watched as Oja Kodar emerged as Orson’s favorite actress (and mistress), surpassing even Rita Hayworth. On the other hand, Chris watched her father’s films with more avidity. She claims that her view of the cinema as a medium was changed forever after she saw Citizen Kane at 18. Typically, her father didn’t accompany her for her first, or the many subsequent, viewings.

Rosenbaum reports he responded most directly to Chris’s accounts of her father’s wayward affections. Orson Welles would periodically appear in his daughter’s life, raising her hopes that he would be fully present in her life, only to be disappointed later. Really, that’s pretty much the same experience all of Welles’s fans had.