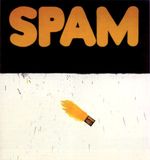 The American artist Ed Ruscha loved paradox and absurdity, as if his paintings were word problems and not visual images. Ruscha’s visual style was grounded in commercial graphic design, and one step ahead of it. The word “Spam” appears in Actual Size (1962) as if it were stamped upon our brains, and yet the word is a nonsense syllable, neither nature nor culture, much like the food product itself. In his work from the 1960s, Ruscha teased out the kernel of absurdity in commercial brands. By making the Spam brand more emphatic than it has any right to be, Ruscha shows us why we can’t help but laugh at Spam–and why actually eating Spam is so correspondingly sad.

The Spam of Actual Size is the precursor to the now widespread practice of creating brands out of semi-words, Dadaesque combinations of the well-worn and the peculiar: Accenture, Elantra, Verizon. They’re like words from a mythical culture that had products but no people. These semi-words are supposed to be instantly vernacular. Verizon became so ubiquitous so quickly that you’d swear the business was founded, way back when, by Jebediah Verizon. In the age of Google, of the bottomless archive, the origin of “Elantra” is an enduring mystery.

Ruscha has something to say about the mixed-up temporality of our shared language and the untraceable symbols generated ceaselessly by hyper capitalism. In his later work Ruscha became intrigued by the possibilities of the silhouette. When Ruscha paints silhouettes of teepees and other images from the American West, it becomes quickly apparent that what we’re looking at are logos. It’s no coincidence that Ruscha happened upon this motif when Ronald Reagan was president. By the early 1980s the American West had been so thoroughly commodified by popular culture that it no longer functioned as a mythical past. Furthermore, the Reagan/Bush I/Bush II era, disrupted only by a Bubba interregnum, turned the West into a brand of political fantasy. Ruscha depicts the West as a series of images both instantly recognizable and barely there, a space depleted of any promise or use value. All that’s left is the mild visual pleasure of the logo.

For more on Ed Ruscha, see Hal Foster’s remarks on an exhibit of his work at the Hayward Gallery at the Southbank Centre in London.