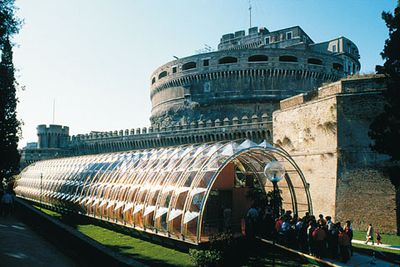 Architect Renzo Piano talks to Abitare, the Italian design magazine. The interview is a design version of the Paris Review Writers at Work series in that Piano suggests that different working methods arise out of different conceptions of architecture as a design practice. Piano contrasts his working methods with dreamy architects like Frank Gehry, who “initially favours his mental imagination,” and Jean Nuovel, “who lies down on his bed and starts to concoct something.” Piano regards himself as a builder, an assembler of pieces, a kind of “pirate” who steals elements from other buildings and assembles them into a coherent whole. He likens his approach to the writer Italo Calvino, an obsessive note taker who immersed himself in daily experience, like a good architect should. Calvino began “stealing from daily life” because he “never believed in the idea of a wild creative impulse.” Piano concurs, adding, “As a good Genovese and a Virgo, this method stays with you for your whole life.”

In addition to his hands-on approach to design, Piano has a strong chthonic impulse. He regards buildings as three-dimensional objects that rise out of nature (or are embedded into cities, another metaphor he uses). He says, “Architecture can be seen as a way of lifting enormous structures from the land in order to create space for the unpredictable flows and movements of daily life.” His IBM Traveling Pavilion, pictured above in Rome in 1986, expresses this impulse.

If buildings are rooted in place–an ideal being challenged by younger, more avant-garde architects–they should also express something deep within a culture. Piano tells the story of taking his 10-year-old son to a museum exhibit of Viking ships in Oslo. He says,

Looking at them you realise that the way that they are designed, which seems so strange, is not only connected to practical issues to do with sailing, but also to something else. When you build something there is a moment when you realise that it is not enough just to deal with the technical questions and that you need to add something extra – a dream, a desire, an imagine, something which represents you.

Viking ships pushed the ancient technology of sail-aided rowboats to its limits. But their non-functional design features expressed a shared cultural attitude about nature and death. As stout as their ships were, the Vikings didn’t dare to cross the seas without a little magic built into their boats.

For Piano great architecture combines “a response to needs and a response to dreams.” This belief leads him to defend his Modern Wing at the Art Institute of Chicago, which has been criticized for being too blandly functional, as “a powerful visual machine, carefully planned in every detail in order to perform this function to the highest level.” Here I have to agree with Piano: the Modern Wing is a sublime machine. All of his best work can be seen this way.