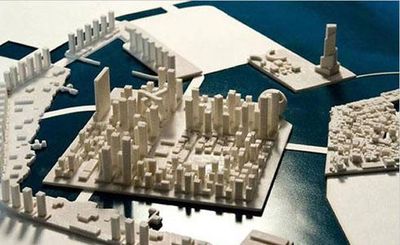 Across the world buildings under construction are stalled and existing buildings are being torn down to make way for, well, nothing else. And, as always, buildings in Detroit are sprouting trees.

Evidently, the financial troubles faced by government-backed developer Dubai World aren’t as serious as first reported, but the company filed for bankruptcy anyway. Among the projects imperiled is Waterfront City, the Rem Koolhaas-designed generic city in Dubai’s harbor. About 30% of the dirt has already been moved to create the city, which will be twice the size of Hong Kong. However, several developers have suspended their Waterfront City projects, and the rest of the massive project may be sold off to pay the bills of Nakheel, a Dubai World subsidiary.

Other Dubai projects in serious trouble include the 80-story twirling towers development, once proposed for Chicago and now under some sort of stealth construction at an undisclosed location in Dubai. There are the usual financial troubles along with differences of opinion between the financial backers, who aren’t related to Dubai World, and the architect/developer David Fisher, a megalomanic who wants to keep the tower’s location a secret in order to surprise everyone. The biggest surprise would be if the building is completed at all.

Meanwhile, closer to home, the Chicago Spire saga continues. On October 9 architect Santiago Calatrava came to Chicago to declare the project wasn’t dead, even though cranes have been stilled since June. Three days later the Spire’s sales office was evicted for nonpayment of rent. Now the Spire developer is trying to convince local unions to lend money to fund the project. The tactic isn’t as desperate as it sounds: unions financed the construction of Bertrand Goldberg’s Marina City, completed in 1964 and considered at the time to be a highly risky project. In any case, so far the unions haven’t agreed to sign anywhere.

Failing to land the 2016 Olympics hasn’t stopped the city from demolishing four Walter Gropius-designed buildings at Michael Reese Hospital: The Friend Convalescent Home, the Laundry Building, the Serum Center and now the Power Plant. Three more are scheduled for demolition, while the final building will undergo some sort of obscure evaluation, the end result of which will probably be demolition. The Gropius buildings are located on land designated to be athletes’ housing for the Olympics, but no new use for the land has emerged.

And finally, a little box designed by another great Modernist architect was demolished last week. The design of the “Test Cell” has been attributed to Mies van der Rohe as part of the IIT campus, although Mies’s grandson believes Mies handed off the design work to a junior architect. In any case, the building is gone, making way for a new train station.