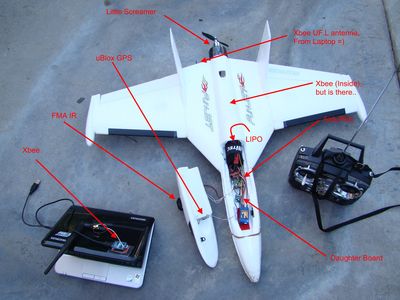 Here’s a sampling of ideas floated this week, most of them bad.

Start your own war: Wired’s Chris Anderson has started a DYI drone project using Google Sketch Up. You can even hire a Chinese company to make your drone so you amuse yourself by flying it over the volatile region of your choice. South Waziristan is always good for a few laughs.

Someone gave a Caravaggio to the Mafia, which let rats gnaw on it until the painting had to be burned. Tony Soprano never would have let that happen, I’m pretty sure.

As if jazz didn’t have enough problems: Now people are calling the police when a song isn’t sufficiently jazz-like. (Jazzish? Jazz worthy?)

Peter Zumthor is kicking around some ideas for the LACMA. Presumably he won’t propose leveling the museum campus, like Rem Koolhaas once did.

Chicago mayor Richard Daley is still seething over losing the 2016 Olympics to Rio. He has a point: if the IOC already knows where it wants to place the Olympics, it should just come out and say so, sparing cities like Chicago a lot of grief.

And finally, if the Kindle isn’t expensive enough for you, here’s what’s coming soon to a credit card near you: Buy short stories on iTunes for $4 each, create a playlist to read on a $800 Apple tablet.