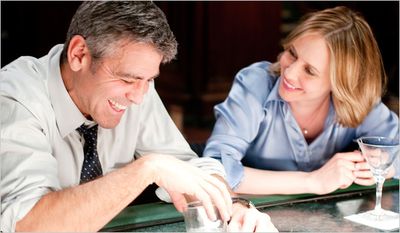 My wife and I went to see Up in the Air on Avatar‘s opening night. It was already evident that Avatar was eating the brains of everyone who saw it. One woman called the police when  some kids talked during the movie. (The cops were not pleased about being summoned.) Up in the Air, on the other hand, wasn’t in 3D, but it had George Clooney, who is a sort of a special effect all by himself.

Clooney is known for his vaguely old-school Hollywood persona. He’s Cary Grant freed of the strictures of the studio system. Clooney’s politics may be progressive, but his screen presence imbues his films with a retro sheen. Up in the Air is no exception. While its theme is postmodern, and its editing is brisk (at least in the first 20 minutes or so), Jason Reitman’s film demonstrates why classical Hollywood cinema is so appealing and enduring. It also reveals its limitations.

Clooney’s character, Ryan Bingham, seems to travel exclusively to the office park backwaters of the nation. Yet Reitman and Clooney convince us that Ryan’s carryon lifestyle is appealing, even envious. Early in the film Reitman stages a montage sequence showing Ryan gliding effortlessly through all the travel points most of us find mildly exasperating even under the best of circumstances, such as the flight check-in or the gate search in which you feel like you’re going to walk off the end of the earth. Ryan maintains his look of self-satisfaction even in the rental car checkout. Reitman cuts briskly while Clooney’s voice, familiar from commercial voiceovers, invites us to see the beauty of the hub-and-spoke life. He describes an airport VIP lounge as if it were a Maybach in his driveway.

Once the film establishes Ryan’s world, Reitman faces two problems. First of all, the sociological context of the film is a lot more interesting than the story it has to tell. One look into Ryan’s world, with its gold cards and casual sex, and all we want to do is get back on a plane with Ryan. But no, this is a classical-style Hollywood film, so ultimate meaning must come from narrative, not setting. Yet, all the interest lies in the film’s world as it is at the beginning.

This isn’t an uncommon dilemma for an American film. American Gigolo (1980) is perhaps the best example of a film that presents a fascinating world, then doesn’t know what to do with it. Written and directed by Paul Schrader,  a highly-regarded screenwriter at the time, Gigolo reached its dramatic peak in the famous “Call Me” montage sequence–two minutes that made stars out of Richard Gere and Blondie. The film could have ended there, at the conclusion of the first act. Instead, faced with the moment it has to tell a story, it quick changes into the Rockford Files. Like Air, Gigolo seduces us with unexpectedly attractive surfaces concealing morally ambiguous depths, only to quickly devolve into a conventional genre picture. That Paul Schrader couldn’t do more with the film’s intriguing premise made the shift all the more baffling.

The second problem Reitman faces in adapting the Walter Kirn novel for the screen is that Ryan’s conflict is almost entirely internal. Kirn himself has commented on the lengths to which the screenwriters (Reitman and Sheldon Turner) went to externalize Ryan’s thoughts. Hollywood used to employ actors who made careers out of being the best friend of the hero or heroine. Their sole dramatic purpose was to get the main character to talk about their internal feelings. Eve Arden, for instance, specialized in being Joan Crawford’s best friend. Working in the post-classical studio era, Reitman and Turner have to hop off the plane, as it were, to find these kinds of people. They send Ryan to northern Wisconsin, where he attends his sister’s wedding. To tease out a sense of internal doubt Reitman and Turner force Ryan to lecture a reluctant groom on the virtues of commitment. Clooney tries to make it work, and Reitman’s camera looks desperately for something comedic, but it’s the least convincing scene in the film.

Reitman works hard in this movie, certainly harder than he did in Juno, but one can’t help but think the material would have been better handled by a director with access to a wider range of directorial tools. Antonioni would have known how to keep Ryan sealed up in his world while still revealing the spiritual desolation of American consumer culture. Reitman gamely compensates by employing unprofessional actors full of raw emotions about being laid off, but as affecting as their scenes are, they’re not enough to convey the force of Kirn’s broadside against consumer culture.

In the novel, Ryan dies at the end, and echoes of this plot make it onto the screen, especially in the final scene. Ryan is dead from the very beginning of the film; he just doesn’t know it, like Bruce Willis’s character in The Sixth Sense. His will to illusion is so great he convinces us he’s alive, too.

One of the running jokes of the film concerns Ryan’s fumbling with his hotel key cards. He extols the virtues of the unencumbered life, yet his wallet is overflowing with useless cards that, for some reason, he can’t throw away. It’s in these fumbling moments that Ryan seems the most human. Every threshold has an element of terror, and for Ryan the prospect of getting locked out of his commodified existence is much scarier than losing contact with his family and friends. In this way, he’s just like us.