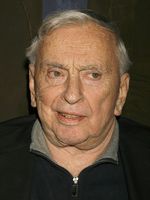 The critical take on Gore Vidal was established two decades ago: his novels are built on swamp land, but he’s a brilliant essayist and conversationalist. At his peak, Vidal was the new and improved version of Oscar Wilde, equally versed in the long and short forms of wit. He’s sole surviving member of the last generation of truly public intellectuals in America. We need Lionel Trilling more than ever, but, as Christopher Hitchens writes, Gore Vidal no longer has anything worthwhile to say.

Hitchens is one of the few people still paying attention to Vidal, who has degenerated into a bitter crank. Even at his best Vidal’s pronouncements came from an airless room, their author transfixed by a bust of Lincoln. The lack of oxygen now seems to be effecting Vidal’s brain. He remains convinced that the Bush administration allowed the 9/11 attacks to occur so that the US could build an oil pipeline through Afghanistan. We’ll use the oil to gas up our “coolie cars” foisted upon us by our Chinese masters. Timothy McVeigh was “a noble boy.” England, he informs a British interviewer, isn’t a country, “it’s an American aircraft carrier.” And so on.

Few people are more stung by Vidal’s descent into madness than Hitchens. Vidal once designated Hitchens as his heir, and Hitchens was flattered enough to assume the role–up until the 9/11 attacks, which sent Vidal around the bend even farther than Dick Cheney, which is saying something. Since then Hitchens has disavowed all association with Vidal, declaring. “I have no wish to commit literary patricide, or to assassinate Vidal’s character—a character which appears, in any case, to have committed suicide.” Hitchens has another reason to distance himself from Vidal: if he’s not careful Hitchens’ brand of tetchy contrarianism could one day consign him to the same right-wing petting zoo.

Glimpses of Vidal’s crack up were visible early in his career. He always had “less adorable traits,” as Hitchens delicately puts it. But his fall from grace also has to do with his Wildean stance: wit as performance–and a one-man show to boot. Oscar Wilde is still a lot of fun to read, but he’s something of an outlier in his own times. Compare him to Matthew Arnold and Paul Valéry, a generation older and younger (respectively) than Wilde, both poets of wide learning who remained open and curious about the world around them–and who took care to engage in dialogue with their contemporaries. Read Wilde and you learn about his life and the worst aspects of his times. Read Arnold and Valéry and learn about the aspirations of their times. Read Gore Vidal and all you get is Gore Vidal, appearing on stage with a bust of Lincoln, reciting all his grievances.