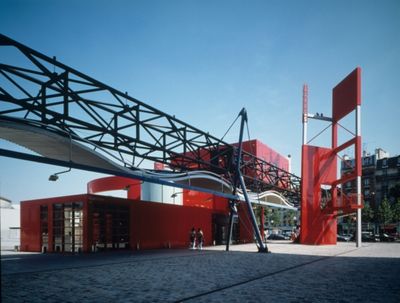 Peter Eisenman used to tell a story about working with Jacques Derrida on the Parc de Villette project in Paris. At the start of the project the founder of deconstruction, the enemy of fixed ideas and eternal verities, believed that a park should be nothing more than a collection of trees and benches. Eisenman and Bernard Tschumi quickly set him straight, and Derrida wrote “Point de Folie–maintenant l’architecture” to prove that he never thought a park was just a park.

Derrida begins “Point de Folie,” his account of the Parc de Villette project, with a desire to engage with a building: What is the relationship between a particular place (a building), a particular time (the just maintenant), and an assembly of people (us)?

First, a building forms an us, which doesn’t exist before we encounter a building. Yet, the immediacy of the encounter itself is formed by a design (a writing) that happens long before the event takes place. The design isn’t a building, isn’t an experience, but the design contains the germ of the building’s meaning. Thus, the meaning of a building is outside of it, even as we enter it. It gives us a meaning that it doesn’t possess in the present. This is the folie, the madness, of architecture. (The term folie is also a play on the 26 folies, or playground structures, of the Villette.) The moment we enter a building, all the architect’s intentions in regard to spacial, tactile and symbolic meaning suddenly fall apart. “The folies put into operation a general dislocation,” Derrida writes, “they draw into it everything, until maintenant, seems to have given architecture over to meaning.”

Buildings aren’t meaningless, of course, but to construct a meaningful encounter with a building it is necessary to examine what Derrida calls the “architecture of architecture.” A building is a construct, something artificial, even though it frames our relationship to nature. But architecture is also a history of building and of symbolic relations: to home, family, community, religion, the state, to death. When we inhabit a building it becomes a part of us to the point at which we forget its historicity. The building becomes nature. “It is common sense itself.”

Even the most functional building must have meaning drawn from the outside, from the culture at large. No building can escape signifying something in the larger culture. Yet, a building must also have materials–stone, wood, steel–that resist abstract meanings. These materials are sensory first, symbolic second. Deconstructive architecture looks for an eccentric, particular meaning, wholly true in our encounter with a building right now. It’s the sensory pleasure of materials. It’s the grid that allows for wandering.

Derrida isn’t simply arguing that everyone is free to interpret a building as they please, as if Frank Gehry’s Guggenheim museum were just another text in Intro to Lit. He also reminds us that the meaning of a building is always already (to use a favorite Derrida locution) open and unsettled. Imagine an architect agonizing over the proper door handles for a museum. How does he or she know this is the right door handle, and not another one? First of all, it is necessary to imagine a museum patron who will notice small details like that. It may also help to demonstrate how a person should see a building. Architectural photography helps people see a building as the architect meant it to be seen, i.e., as an instance of architecture. This is why Derrida notes that entering a building is an event “marked by photography or cinematography.” The architect may lecture or write an essay about his creative process. In a recent interview Renzo Piano described himself as a “hands-on” architect, yet the door handles are one of the few poor design choices in his Modern Wing at the Art Institute of Chicago. In any case, a single design decision can proliferate into all sorts of meanings. For Derrida, all the sketches and essays and photographs are what make a door handle a door handle in an art museum. Architecture is as much about controlling meaning as it is about keeping the roof from caving in.

For an architect, children and their parents don’t simply enter a park, play for a while, and move on. Childhood and parenthood don’t pre-exist as concepts. They must be constructed at the moment when the first design sketch starts, then re-constructed at each stage of the project. Conversely, entering a park doesn’t guarantee pleasure or relaxation. Other experiences are always possible: a child could get hurt or bullied; a parent could be stuck talking to another parent talking tediously about how their little Mackenzie or Cody is already fluent in French at age four.

has it out with the event; it no longer offers its work to users, believers or dwellers, to contemplators, aesthetes or consumers. Instead, it appeals to the other to invent, in turn, the event, sign, cosign, or countersign: advanced by an advance made at the other–and maintenant architecture.

Deconstructive architecture is not a style; Derrida is very emphatic on that point. It is a way of recognizing that every element in design is a metaphor, no matter how material and functional; that architectural intentions always miss their mark (cf. any recent discussion of Daniel Libeskind’s buildings); and that categories like “client” or “resident” don’t exist outside of the minds of architects. Deconstruction returns us to Baudelaire’s observation, “the entire world is nothing but a shop of images and signs.”