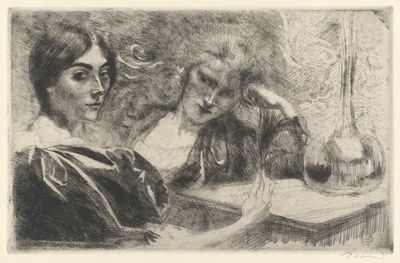 Ah, Chicago in January. The temperatures go up a few degrees, down a few degrees, but the cloud cover never budges. It’s the kind of weather that leaves people who have just returned from warmer climes in a daze, as if they had never left. So here’s some season-appropriate items for Fun Friday that show sometimes treasures can be found, even where the sun doesn’t shine.

Unity Temple Vandalized: PrairieMod’s Eric O’Malley follows up on the initial reports of vandalism to Frank Lloyd Wright’s Unity Temple and finds the damage is both better and worse than first reported. The vandals climbed up the scaffolding installed for the long-overdue remodeling, and dumped a bucket and some light bulbs through the glass roof–but not a bucket of tar, as first reported. The most significant damage was to a Wright-designed light fixture. As I’ve mentioned before in this space, I lived in Oak Park when I started this blog, and, a few years before that, I was married in the Unity Temple.

Gloomy Outside, Gloomy Inside: Here’s an appropriate exhibit for the dark, cold Chicago winter: The University of Chicago’s Smart Museum of Art hosts The Darker Side of Light: Arts of Privacy, 1850–1900, described as “an exhibition that examines the private worlds of late nineteenth-century Europe through prints and other works meant for quiet contemplation.”  The exhibition gathers works by artists such as Albert Besnard (Morphine Addicts, [1887] above), Félix Bracquemond, James Ensor, Max Klinger, Käthe Kollwitz, James McNeill Whistler, Charles Meryon, and Anders Zorn. Together the prints, drawings, and small sculptures reveal “a sober world of individual collecting and private study in which prints were kept aside in portfolios, bronze medals were stored away in cabinets, and statuettes were set on a table in the stillness of the library, to be viewed discreetly on chosen occasions.”

Exhibition curator Peter Parshall of the National Gallery of Art will deliver an introductory lecture on the exhibition during an opening reception at the Smart Museum on Thursday, February 11, from 5:30 to 7:30 pm. See here for more info.

Architect, or Whatever: The New York Times posted one of their periodic “making the best of a bad economy” stories, this time about architects, who are ground zero of the real estate market collapse. The article features a guy who will answer any architectural question for 5 cents, two women who have started an ice cream truck business selling concoctions like Mies Vanilla Rohe, an architect who has enrolled in truck driving school to support his wife and two young kids. Best of luck to all of them; they’re going to need it. These stories always catch people at the sunny, optimistic early stages of their new ventures. Architectural ice cream isn’t exactly a recession-proof business. As for the guy trying to become a truck driver, slumming in the job market doesn’t mean finding a job is any easier. Oftentimes manual and semi-skilled labor jobs are just as competitive as high-paying, white collar jobs. And work experience matters even for truck drivers.

Kafka and the Feral Cats: Eighty-six years after his death, a friend of Franz Kafka finally got around to inviting somebody over to reminisce about the author. “Kafka was a slightly strange man,” Alice Herz-Sommer, aged 106, says. Meanwhile, a court ordered two sisters, the daughters of Max Brod’s secretary, to open up their cache of Kafka papers, where they were stored for decades in the sisters’ feral cat-infested apartment in Tel Aviv. They’re now in bank safety deposit boxes. The National Library of Israel argues that the sisters never should have gotten the papers in the first place, and an Israeli court has agreed.

A Modern Winter: Finally, speaking of Chicago in winter, recently Edward Lifson flew home (I’m pretty sure Edward is still living in Chicago; he travels so much it’s hard to tell) to a snowscape that left him wondering, “has any artwork captured a Chicago winter?” Good question. I can think of some curses that do, but not an artwork. He heads to Renzo Piano’s Modern Wing to find out.