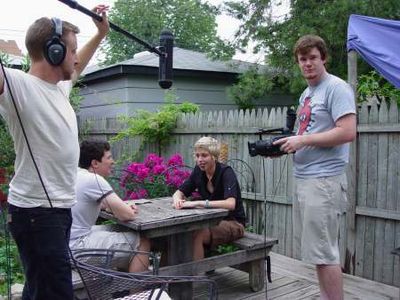 Every so often a film will stick in my head because it seems to say something about a larger issue. The film doesn’t have to be an excellent or even a particularly good one. In fact, I think I’ve learned more from mediocre films than I have from exemplary ones.
A few months ago I finally got around to watching Joe Swanberg’s Hannah Takes the Stairs (2007), and it’s troubled me ever since. First of all, seeing it so long after its theatrical release had one benefit: it now looks like the beginning of the end for the genre known as Mumblecore. Secondly, and more importantly, I wonder if the film may also signal the beginning of the end of a kind of urban life.

Hannah looks at a few months in the life of a pretty young woman who lives and works in Chicago—or, more accurately, a cinematic Chicago, which is somewhat different from the real thing. The cinematic Chicago is the urban without a city. Simply evoking the city’s name instantly evokes a range of qualities without actually having to show anything directly representative of Chicago as a unique place in America. Setting the film in Los Angeles, which would have been more appropriate for the plot, would have required the filmmakers to insert shots of palm trees and highways. The heroine would need a car, and a nice one, which would have detracted from her bohemian ethos. The film’s one beach scene would have had to been shot on a specific, named beach, like Muscle Beach, rather than an anonymous expanse of sand, which appears in the movie.

New York City, another more credible setting for Hannah, would have meant that the characters would live in a much more crowded world. They would have had to get out more. To a much greater degree than perhaps more than any other city in the US, life in New York is lived in public space, primarily because the living spaces are so small. Similarly, setting the film in Cleveland, Boston, Milwaukee, Atlanta, or any other American city with a minimal amount of urban grit would have only interfered with the focus on the title character’s internal conflicts and vacillations. Repeatedly throughout the film there would have to be shots that said “Cleveland” or “Milwaukee.”

The main point of living in any major American city is not so much the quality of one’s interior space as much as one’s address and the places to which one’s location grants access. To live in a densely populated urban neighborhood is to have a sushi restaurant around the corner and an Ethiopian carryout across the street from your bus stop. It’s having a good bakery down the street and an amenable bar with two open stools within walking distance. It’s three subway stops to the art museum and four to a night game at a baseball stadium. It’s buying the Sunday paper at the corner grocery store. It’s the pleasures of one’s grandparents’ city except that you got to choose which neighborhood you live in. You get to choose your own tribe.

The suburbs, by contrast, are locked up. Everyone is safe in their homes and the car doors lock automatically. There’s a big yard in the back of the house and plenty of outlets inside. Netflix delivers, and you can play Gladiator as loudly as you want on your surround sound system and there’s no downstairs neighbor to complain. All the children wear bike helmets, but their parents drive them to play dates. If urbanites are on the outside looking in, suburbanites are on the inside looking further inside. The suburbs are a form of interiority that initially developed in American culture after World War II, and has intensified, become more inward and insular—or so it might seem at first glance.

Hannah Takes the Stairs, I think, indicates that the interiority of the suburbs may be creeping into the city as well. More on that tomorrow.