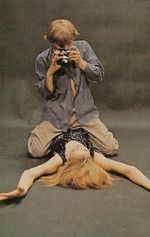 Today is Groundhog Day, which is when we start to subscribe to two beliefs: that one day we won’t have to leap over slush puddles anymore, and that the newly expanded Oscar Best Picture category will finally recognize the very best of American filmmaking.

By Tuesday afternoon, both possibilities seem distant. The Best Picture category is Avatar and the nine dwarfs, while the entire selection of nominees seems designed to ensure that Matt Damon and Sandra Bullock attend the ceremonies, thus exorcising whatever vibes are left over from Mickey Rourke. Supposedly, the newfangled Best Picture award will increase the likelihood that the Academy’s choices will coincide with the votes that viewers have already made with their credit cards. With that in mind, Box Office Mojo helpfully lists the grosses of the contenders. Everybody is happy: Casual moviegoers are more likely to brag that they’ve seen at least one of the nominees, while diehards can complain about how the Academy still doesn’t get it. How did Up get nominated for Best Picture, while Fantastic Mr. Fox just got a Best Animated Feature nomination?

Probably anticipating we would be disappointed with the Oscar nominations, the Village Voice dusted off an old feature from March 2, 1967, “The Third Annual Village Voice Readers’ Film Poll — The Best Films of 1966!” No. 1 was Michelangelo Antonioni’s Blow-Up (his first English-language feature). It was a banner year for Jean-Luc Godard’s Masculine Feminine and Band of Outsiders were in the top ten, while Pierrot le Fou came in at No. 19 and Alphaville at No. 35; Agnès Varda’s Le Bonheur, François Truffaut’s Fahrenheit 451, and Pier Paolo Pasolini’s The Gospel According to St. Matthew were also in the top ten.

Although the 1967 poll was presented without comment, the unspoken subtext is, “they don’t make them like that anymore.” On the one hand, it’s hard to image a list of similar power will emerge from 2010, but on the other hand, what’s striking about the list is how the films come from a relatively narrow range of countries. International art house cinema is a much more global operation now. Or, possibly, in the days before VHS and DVD (and, soon, online distribution), Americans weren’t aware of the variety of global filmmaking, so their choices centered around a small group of auteurs.

By the way, the winner for Best Picture from the 1966 season: A Man for All Seasons.