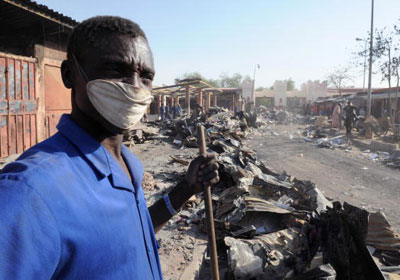 Back in 1998, when the global warming issue was just a gleam in Al Gore’s eye, architect Richard Rogers published Cities For A Small Planet

, in which he argued that large cities were the major driving force behind global environmental degradation, warning, “cities are undermining the ecological balance of the planet.” Tokyo has polluted its bay, Mexico City has sucked its rivers dry, London’s car traffic emits more pollution than the its nineteenth-century chimneys ever did.

that the global ecological crisis would be solved if gathered up everybody and gave an apartment in a high rise. Mau’s enthusiasm for the proposal is infectious and is worth quoting at length:

The more reasonably we can fit together, the more we can support what surrounds us. If each member of our current global population (6,376,394,000 and growing) lived in his or her own Levittown house (750 square feet), then we would use approximately 440,085.8 km2 of land for housing. Surprisingly, this is only 0.35% of all the Earth’s 126,909,000 square kilometers of habitable land. Factoring in the average density of urban “sprawl”—three homes per residential acre—we would still inhabit only 6.8 percent of all the Earth’s habitable land. Add to this the massive space needed to accommodate highways, farmland, city centers, and all the other infrastructure required to support our global population. Plus, there’s are the ecosystems that support cities, such as New York City’s watershed, a 1900-square-mile district that feeds the city’s reservoirs, delivering a billion gallons of potable water daily.

Now imagine if we stacked the world’s population vertically. We’d take up dramatically less space. As the world urbanizes, we need to acknowledge the ever-growing condition of urban sprawl, design it better, and simultaneously look to density as a solution, which will liberate territory for the production of nature. If people live in cities, they don’t destroy the country. As we create density, we simultaneously open up the surrounding rural space.

More recently, others have pointed out that cities are more likely to have green buildings and infrastructure systems. Their density means that vehicular transport can be reduced with mass transit. Also, the larger buildings found in cities make it possible to consolidate heating and cooling systems in larger structures. New York City is one of the most environmentally efficient cities on the planet because of its density. Density itself is not necessarily the enemy. If one is looking for an enemy, suburban sprawl would be it. Suburbia needs its own innovations because the efficiencies of scale possible in cities don’t always work there.

And yet, megacities shouldn’t be left off the hook completely. Yes, any given large city in the developed world probably emit less pollution per citizen that a gated community in an Ohio suburb, but in the developing world, the story is different. According to Mercer Human Resource Consulting’s 2007 Health and Sanitation Rankings, the dirtiest city in the world is Baku, Azerbaijan, which remains burdened with a Soviet-era industrial infrastructure. Second is Dhaka, Bangladesh (lead everywhere). Third and fourth: Antananarivo, Madagascar and Port au Prince, Haiti (before the earthquake). Mexico City is fifth, but dropping as its horrendous traffic slowly alleviates. Most of the rest of the most polluted cities are in Africa (the image above is from Ndjamena, Chad, ranked 11th in the world) and, generally, their situations aren’t improving. Years of World Bank initiatives have done little to help Conakry, the capital city of Guinea Republic, in its struggle against infant mortality and poor-quality drinking water.