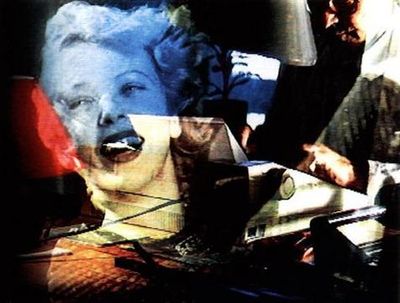 (2003, English translation 2007), Jacques Rancière immediately clarifies one point that preoccupies many people talking about the effects of digitization on our perception of reality: images haven’t completely taken over reality, nor has reality assumed the image’s capacity, in an age of mechanical reproduction, of infinitely replicating itself. Both of these claims beg some questions: Is the image something outside, a painting or a film, or it is internal, vision itself? Why are film images more other, more distant from us, than television images?

Even though television has matched or, in some cases, surpassed the cinema in narrative complexity and richness, the cinema remains much more likely to play with our expectations about what we want to see and how those expectations are met. Cristian Mungiu’s tight, static framing in 4 Months, 3 Weeks and 2 Days (2007) is unlike anything one would see on television. Even the classical Hollywood cinema occasionally exploits the materiality of the frame in ways unimaginable in television. Jerry Seinfeld never told a joke like the one Billy Wilder tells in The Apartment (1960), in which Fred MacMurray unfolds Jack Lemmon’s HR report so that it tumbles right off the screen.

The cinema is far more self-conscious about creating a sense of “imageness” than television, even though the latter is a highly artificial visual medium. In this way the cinema is closer to literature than television, according to Rancière. The cinema learned how to create images from Flaubert and the nineteenth-century Realist novel. In fact, for Rancière the archetype of the modern image is Charles Bovary’s hat, which is a bare object with no symbolic meaning. It’s just a hat, but in its “ugliness possesses a profundity of silent expression like the face of an imbecile.” The hat is an anti-digital image. It interrupts the flow of language because it’s too stupid to comment upon. It’s too banal to even consider as a faithful representation of something. And yet, like a perfectly tuned piece of writing, it expresses something that can’t be expressed.

Charles Bovary’s hat is an example of what Rancière calls “the image-sentence.”  Flaubert’s writing is full of them, in the small details scattered throughout the text without a rationale. Love, for instance, is represented by linking it to absence of rationale for small details. Flaubert’s sentences begot Modernism, with its small movements of meaning, rhythms of the body, isolated brush strokes, and fragments of meaning. Modernism itself as the product of increasingly isolated realms of reality, which, Hegel correctly predicted, would lead to an schizophrenic art without any grounding shared thinking. In an age of specialization, Rancière’s says, art evinces “a great chaotic juxtaposition, a great indifferent melange of significations and materialities.”

Popular culture presents itself as a cure to this schizophrenia by offering what Rancière calls the “torpor of great consent,” a false unity of human sensibility enforced by the commodity. The image-sentence (again, think of the hat) is on the side of the “art of the furies.” In image-sentence language, sentences that aren’t about the sayable, images that aren’t about the visible. The image-sentence is aesthetic in that it ruptures the standard relationship between word and image. Sentences still link, then assume image’s power of invoking presence as a passivity of things that don’t have any other rationale for existing. Images, meanwhile, leap between sensory realms. The image-sentence unities these qualities.

Rancière’s example of an image-sentence is telling. Again, Flaubert makes an appearance: the famous agricultural fair scene in Madame Bovary

is a montage sequence juxtaposing sights and sounds from the same scene, but they don’t quite cohere. The narrator describes an old woman getting a sort of lifetime achievement in cow milking medal as an orator drones on and on about her brilliant career as a farm hand. Intercut with this speech is the equally empty blandishments of Emma’s seducer.

In effect, Rancière is arguing that the future of the image lies in Flaubert’s 1856 novel, in which images float free, sometimes reflecting fleeting sensations, sometimes offhand statements. We’re still living in the aesthetic regime of modernity, Rancière claims, and we will be for the foreseeable future. An extended attempt to rid Western culture of images, which culminated in Surrealism and Constructivism, ultimately failed. Similarly, the Marxist project to free us from the lure of the deceptive image is effectively dead. Looking for deeper meaning in the image simply expresses mourning of the lost immediacy of the image, then trying to transform that mourning into knowledge.

How the future of the image has changed with digitization is a much larger question. Rancière, unfortunately, doesn’t have much to say about this issue. However, he does provide an historical framework within which questions may be posed. For instance, does the digital image have the capacity to shift our relationship to language and the sensory realm, or its it simply a cheaper, more easily distributed form of the same kinds of images we had before the Internet? Is the image flow anything more than merely an updated instance of “the warm intimacy of the commodity-king”?