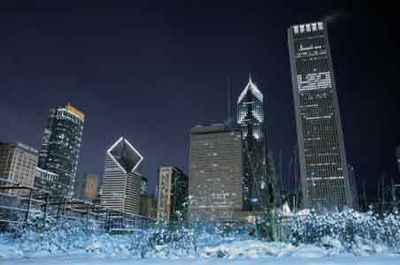 Chicago has a new biography, even though it isn’t a person. If it were, it would be in Cancun right now, instead of freezing under a foot of ice-encrusted snow. In his new book Chicago: A Biography

, Columbia College Chicago history professor Dominic A. Pacyga tells the story of the city that’s been known variously as the “Windy City,” “the City that Works,” “the most American city,” and currently, “the City of 5,000 Unsold Condos.”

Pacyga’s Chicago is the city of immigrants. The first immigrant was a fur trader of mixed West African and French descent named Jean Baptiste Point de Sable, who built the first European settlement on what is now a Holiday Inn parking lot. The city’s population expanded with unprecedented rapidity thanks to the waves of immigrants seeking jobs created by the city’s industrial boom during and after the Civil War. The most important turning point in the story was the 1931 election of Anton Cermak, a Czech immigrant who wrested control of the city from Republicans and the “Lace Curtain” Irish Democrats. Cermak founded the Democratic Machine before being assassinated in Miami while shaking hands with President-elect Franklin Roosevelt in 1933. Cermak expanded the Democratic Party’s constituency beyond the Irish to include Poles, Italians, Jews, and African-Americans. He effectively opened the city to everyone.

If William Cronon (Nature’s Metropolis: Chicago and the Great West

Despite changes brought about by the transformation of the global economy, Pacyga’s Chicago is still a Slats Gorbnik city, a lunchpail town of hardworking immigrants trying to make it in America. The origins of the immigrants may have changed over the years, but the story remains the same. This is one of Chicago’s most treasured fables, and Pacyga tells this story in engaging fashion.

But, to my mind, this is a story the city tells itself to avoid dealing with its more prosaic present. One hundred years ago Chicago may have been one of the main drivers of an incipient global economy, but these days the city has become increasingly generic–just another node in a global exchange of intangible assets. Whatever illusions the city may have fostered about its global prominence surely must have been dispelled by its quick dismissal from the 2016 Olympics bidding. Yes, the city still attracts immigrants, but so do the suburbs. So does Indianapolis. In fact, they are more likely to attract newcomers to this country than Chicago. Most of the “immigrants” to Chicago are graduates of Big Ten universities just launching their careers. Chicago in the twenty-first century is shaped by their tastes and experiences, along with residents from the city’s sprawling suburbs and the multinational corporations that dominate the economy here.

This isn’t to say Chicago isn’t a nice place to live. For middle class people, it may be the most livable it’s ever been. It just feels less and less special, less and less worthy of an affectionate biography like Pacyga’s Chicago.