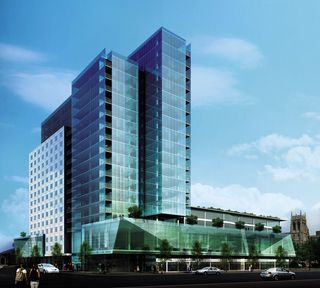 As longtime readers of this space know, I resided in Oak Park, IL. until I moved to the North Shore a couple of years ago. We had originally moved to Oak Park from the West Town neighborhood in Chicago when my wife became pregnant with our son. We chose Oak Park because it was affordable, it had good schools, and it offered many of the amenities of the city, most notably the ability to walk to parks, shops, restaurants, the public library. It offered the perfect balance of the suburban and the urban.

Currently Oak Park is considering a proposal to build a 20-story highrise at a critical intersection in the middle of the main business district. The project includes a 140-room hotel, 85 condos, about 28,000 square feet of retail space and a 510-space parking garage. The project is called Lake & Forest Development after the intersection where the tower will be erected.

Forest Street has perhaps the finest collection of Frank Lloyd Wright homes in the world. His home and studio is located at the intersection of Forest and Chicago Avenues, just a few blocks from the proposed tower. The Unity Temple is a block west on Lake Avenue from the proposed tower site. In short, the Lake & Forest Development will be dropped in the middle of one of the most architecturally significant areas in the United States.

The design for the tower is nowhere near the quality of Wright’s architecture. Its height is out of scale of the rest of downtown Oak Park. It will be visible from the Wright district, which attracts 80,000 tourists a year. It will dump 85 more condos in a real estate market depressed by a glut of condos for sale.

But it might not be a bad idea to build it.

The design, by the giant architecture firm Epstein, isn’t particularly distinguished, but it’s reasonably sensitive to its setting. (Here is the link to the project on Epstein’s site, but it’s now working for me right now.) As Blair Kamin points out, the architects went to considerable lengths to reduce the bulk of the building. The village has already been marred by some bad highrises, although there’s a funky modernist residential tower behind the (very well-designed) public library that I’ve always liked. Lake Avenue doesn’t need a highrise tower, but it could use some better retail space, along with the increased foot traffic a hotel and condo tower would bring. Oak Park could use an economic jolt. Furthermore, Oak Park’s urban feel is part of its appeal. That’s why we moved there to begin with.

The Lake & Forest tower raises larger issues about suburban planning. Countless tons of steel and concrete have been wasted on bland suburban towers, but the genre isn’t entirely an architectural wasteland. The proposed Oak Park tower differs from the standard suburban tower, which generally floats in a sea of asphalt, because it’s an infill project. Instead of contributing to suburban sprawl, as suburban towers usually do, highrises in inner-ring suburbs add good density: more pedestrians, more public transit passengers, more efficient clustering of energy resources. If we’re going to re-imagine our suburbs, to cease pushing housing developments and big-box stores to the horizon, then we’re going to have to accept higher buildings on Main Street.

Frank Lloyd Wright would not have approved of the Lake & Forest tower, but he was partly to blame for the proliferation of inward-looking, intensely privatized domestic architecture. For all its connection to nature, and for all its undeniable beauty, Wright’s domestic architecture isn’t sustainable any more. Nature has changed.