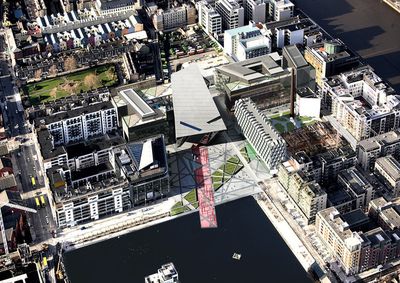 The latest issue of RIBA Journal has a feature on the newly completed Grand Canal Theatre in Dublin. The theatre was designed by Daniel Libeskind with his trademark flippancy: the initial plans were sketched out on on an airplane. Like all of his creations, the Grand Canal was designed to be built on planet Libeskind, which has six or seven dimensions. The developer, the Dublin Docklands Development Authority, was forced to hire Martha Schwartz to integrate Libeskind’s sprawling tangle of glass and steel into the site, a gritty, cramped docklands that once housed a gasworks. She also added the red carpet extending from the theatre to the dockside, now the theatre’s most distinctive design feature.

The results are somewhat mixed, according to Shane O’Toole. The acoustics are great, but the rooflines can drop so steeply that ceilings sometimes plunge to less than eight feet high. O’Toole insists, however, that “very little hubris [is] on display” even when Libeskind’s metaphors break down, such as “the hokey, tricked-out ‘ribs'” inside the main auditorium, which are “intended to resemble large ship’s timbers in a maritime allusion gone wrong.” O’Toole even calls the theatre “[p]opulist and warm-hearted,” words not normally associated with a Libeskind building. Evidently, just as butter makes every dish taste like comfort food, a bit of red makes every building seem welcoming.