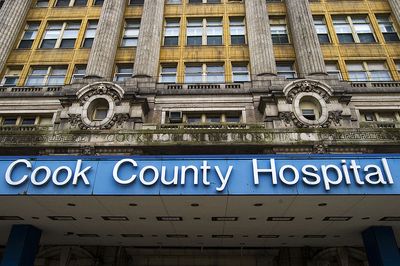 In this week’s edition of Fun Friday, two praise-worthy decisions from unlikely sources and what to read–and avoid reading–about the Oscars this weekend.

Cook County Hospital saved from wrecking ball: Chicago has a long history of destroying its architectural landmarks, most recently the Walter Gropius-designed Michael Reese Hospital campus. The fate of the old Cook County Hospital, a Beaux-Arts pile on the scruffy West Side, was in the hands of the Cook County Board of Commissioners, who for years had been determined to tear it down. But last Tuesday, to everyone’s surprise, the board approved a plan to turn the old hospital into a medical office building. One the eve of a contentious vote on health care reform, the Cook Country hospital is a reminder of a more humane era in American healthcare, when there was still a sense of shared civic responsibility for the health and well-being of ordinary people.

Walmart isn’t (quite so) evil anymore: With its PX-style big box stores and remorseless economic logic, Walmart has long been a symbol of corrosive American giganticism. Only the Hummer (company motto: “Yes, you can become an even bigger asshole!”) carried more toxic sociopolitical baggage than Walmart. Then the Atlantic’s Corby Kummer noticed that Walmart now sells a very credible line of locally-grown produce. “It’s getting harder and harder to hate Walmart,” as one dedicated locavore puts it. It’s as if Dick Cheney suddenly became a vegan.

Slate at the Oscars: I’ve always been of two minds about Slate. I like their cultural critics and their political commentary is better informed than Salon’s, although it isn’t as smart as the New Republic’s. Slate’s chatty model, on the other hand, also lends itself to useless fluff like today’s “Help! Is It Okay to Sleep With the Nanny?” feature. Lately I’ve noticed that Slate has been infected with Googleitis. No, I don’t mean tracking your keystrokes and selling the data to the CIA; rather, Slate has picked up Google’s habit of launching more features than it has the resources or the attention span to maintain and develop.

Slate’s annual Oscars coverage is usually pretty good, but this year it’s sloppy and predictable. Every year they have somebody predict the Best Picture winner based on Oscar history, and this year history points to Inglorious Basterds, according to Grady Hendrix. Trouble is, Basterds is exactly the kind of film that doesn’t win Best Picture. If you’re looking for an upset contender, the smart money is on The Hurt Locker, primarily because of the changes in voting procedures introduced this year, about which Hendrix seems unaware. (Hendrix also cites a 1989 study on the economic value of an Oscar nomination. That study is out of date.) Another regular feature of Slate’s Oscar coverage is the allegedly brave contrarian takedown of a well-liked Best Picture nominee. This year it’s Up in the Air. While this film has its problems, it doesn’t deserve to be Dennis Lim’s straw man.

One-Way Street at the Oscars: Sunday is my daughter’s third birthday, so we will be busy with birthday festivities during the day, which will include a visit to the Chicago Children’s Museum before they bury it. As for the Oscars broadcast that evening, I will avoid the red carpet part of the ceremony, partly because it’s boring, and partly because I’ve always found Joan Rivers horrifying–I’ve always thought of her as the daughter Gollum would have had if he’d settled down with a Na’vi bride on some collagen-rich planet. This year we have to be extra vigilant about little Jillian’s exposure to celebrities after she recently spotted Paris Hilton in a dentist office magazine and declared, “I want to be her.” Once the stars are settled in their seats, however, I will tune in and live blog the ceremonies right here.