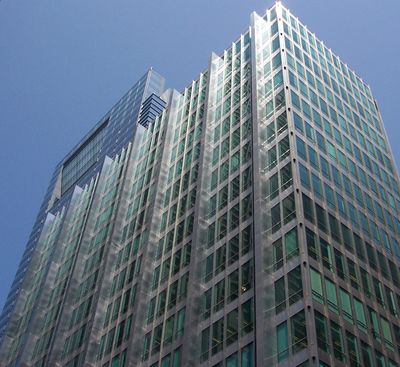 These past few weeks I’ve been locked down in planning a major project–the complete redesign of every website of a major American book publisher–so I’ve not been posting with my customary frequency. I’ve also been behind on news events, including this one: the death of Bruce Graham, a lead partner in Skidmore, Owings & Merrill during the 1960’s, 70’s, and 80’s.

Graham was the most important architect in Chicago during this time. He was responsible for the Sears Tower (now known as the Willis Tower, or the Big Willie) and the Hancock Center, one of the icon skyscrapers of Modernist architecture. Graham played a major role in designing more conventionally corporate buildings such as Three First National Plaza, One Magnificent Mile and the McCormick Place addition in 1986. But perhaps his masterpiece is the Inland Steel Building (completed 1958), an elegant International Style tower. (Image above.)

Since the Sears Tower was completed in 1973, the Chicago skyline has become very crowded. Last Sunday, however, the day after Graham died, I was driving to downtown Chicago from the north suburbs, and I noticed that the Hancock Center and the Willis Tower still dominate the Chicago skyline, not simply because they’re taller than other buildings in the city, but because of their striking profiles. Quite literally, they don’t make them like that anymore.