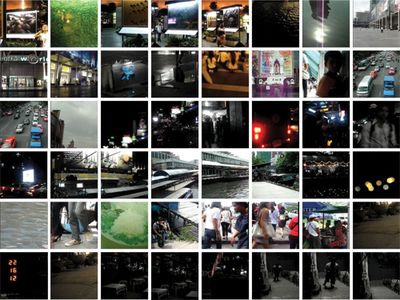 If you’re looking for something to read this weekend, take a look at MAS Context’s University Works issue. MAS Context’s chief editor Iker Gil (interview here) and his staff have gathered student work from architectural schools across the globe. The result is a fascinating survey that not only offers a preview of what kinds of buildings we will see in the future, but also why the buildings take the shape that they do.

University Works is student work, of course, so expect a lot of designs that seem both overworked and underdeveloped. It’s important to remember that the architects featured in the issue are responding to academic assignments, not proposing plans for buildings that will actually get built. There are demonstrations of command of fundamental architectural principles, such as the exercises in the play of lightweight tectonics of the frame versus the heavy/stable stereotomics of the earthwork. There are structures that defy engineering principles and zoning ordinances in order to make points about how structures exist in a larger context. And, as in any student work in any field, there are examples of impenetrably turgid explanatory notes from students who have to show they understand the discourse of their field.

There are also striking similarities amongst the students’ work. In their Issue Presentation, Gil and Andrew Clark note,

Among the schools, methods and approaches extracted from the student work, more are similar than different. The choice of representation and the style of visualization by the students’ highlight this growing sameness. This pseudo-monotony is also present in the absence of sustainability (embedded or the “Green Giant” variety), blobs or sinuous formal resolutions, and urban design as diagram.

The sameness of student work, Gil and Clark suggest, is an indication of how deeply technology has penetrated the practice of architecture–and not just simply the widespread use of CAD programs. “Software and Intel chips have made imitating and creating images easier. Daily doses are now hourly check-ins, while watching the RSS feed on the web has replaced afternoons in the stacks.” This tendency is exemplified by the image above, from a presentation by the Parsons School’s Ross Guntert, in which the sensory richness of the Bangkok docks is atomized into discrete but non-hierarchical images.

For the Facebook generation of architects, “the City is king,” as Gil and Clark put it. The North American students in particular are fascinated by density, as if the final destiny of the human species is to live holed up in dormitories. The University of Toronto’s Lingchen Liu and Chenglong Wang, for example, want to make an already dense urban space–downtown Toronto–even more dense by cramming buildings into all those mini plazas where office workers take their smoking breaks. The only examples of anything remotely resembling a rural architecture come from Waseda University’s Asahi Shinoda, who designed a house in a small town in Hokkaido threatened with extinction by population loss, and a post-modern farm as imagined by Virginia Tech’s Matthew Sander. None of the students in University Works seem at all interested in suburban architecture, which doesn’t bode well for any of us.

Evidently, Mies-style elegant minimalism has gone completely out of style. Bárbara García Sos of the Universidad Politécnica de Madrid is the closet to being a minimalist. She’s also one of the few students whose hands we see, who convey a sense of working with their hands, underlining, perhaps, how far the profession has come from the methods of older architects like Renzo Piano, who specifically defines himself, mostly metaphorically, as a “hands on” architect, or Santiago Calatrava explaining his design for the 2,000-fall Chicago Spire with watercolors painted on the spot.

At the same time, however, the presentations in University Works are as striking and polished as any you will see from an experienced professional. Since these are architects, the project documents are meticulously rendered and inventively designed. You won’t find any of the clip art crap churned out in the business school across campus. Some of the presentations are moody works of art. Two that fit into this category are University of Illinois and Chicago’s Matt van der Ploeg’s austere gray cutaways and the atmospheric models of the Montreal docks created by Tomek Bartczaké of the University of Toronto. Working within a class assignment involving the San Saeb Canal in the heart of Bangkok, Alexandra Milo and Claudia Garay of the Parsons School depart from the coolly observational tone of their colleagues and delve into the history of kite fighting, concluding with a striking image of giant illuminated kites perched over a crowded (density, again) Bangkok neighborhood.

Academic programs are notorious for instilling conformity, especially in arts-related disciplines. To a certain degree, this is deliberate; a student must first learn the tradition before he or she can do something original. Finding a personal style takes time, sometimes a long time, which is why architects tend to be late bloomers. The University Works issue shows which tradition is being passed down to tomorrow’s architects, as well as giving a hint of the direction the next generation will take. Their forms will be deeply influenced by the data flow of the Internet; their structures will be less humane in the high Enlightenment sense, but also more collective in an even older sense. And no Green Giants.