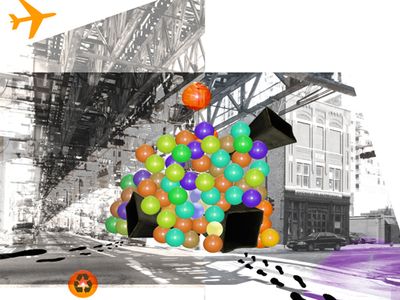 Iker Gil is the Director and Founder of MAS Studio, a collaborative design studio in Chicago. (Check out their blog, too.) He’s also an adjunct professor of architecture at the University of Illinois at Chicago. In this space he’s been mentioned previously as the editor in chief of MAS Context, an interdisciplinary quarterly. In addition, Gil edited Shanghai Transforming
and curated the exhibitions Shanghai Transforming and Synchronizing Geometry. Prior to MAS studio, Gil worked at Skidmore Owings & Merrill’s Chicago office; at Carlos Ferrater, an architecture firm in Barcelona;  UrbanLab, an architecture and urban design practice; and in the Barcelona office of b720 Arquitectos.

This interview was conducted by email in February 2010 and originally posted on February 24, 2010.

How is MAS Studio a “collaborative” design firm?

The studio is organized in a way that allows regular as well as new collaborators to come together for specific projects. In that sense, it is not a fixed structure but a network of people. That flexibility allows everybody to participate in projects that they are truly interested in and pass on others. It is an interesting way to work that has allowed us to collaborate with architects, urban designers, photographers, writers…and expand what we do, for example, developing the design journal MAS Context. In a way, the office itself is an umbrella for people to participate in shared interests.

Who are your influences?

More than specific people probably it has been a place. Growing up in the city of Bilbao, in northern Spain, and seeing its physical and social transformation in a relatively short period of time made me realize the power of a strong vision and ideas, commitment, and good design. It has helped me to have a positive and ambitious attitude about what can be done. From that experience came my interest to research the transformation of Shanghai. In terms of architecture, probably the work coming from the Netherlands, Denmark, Spain and Portugal are my biggest influences. The work done in Portugal is really solid and most of the times with limited resources. I wish it was more known around here.

Your firm has designed everything from bike racks to a college campus. How do the design tasks and challenges differ while working on a small scale compared to working on a large scale?

The scale actually doesn’t change how we work or approach the project significantly. The goal is always to try to generate solid ideas that are explained in a simple way. We do quite a bit of research upfront, understand the challenges and turn them into opportunities. We never have a predetermined idea of how a project has to look so it is always interesting to see how it all turns out. But we invest as much energy on a bike rack as an a master plan.

How do you present your ideas to clients? Some architects like to create detailed models and elaborate 3D graphics, while others, like Rem Koolhaas, use deliberately crude models to illustrate their projects. I noticed you used small and rather abstract models to illustrate your proposal for a new UIC campus.

That specific model, completed with Jacob Chartoff while pursuing our Masters degree at UIC, was created to show a strategy of development for the east campus of the university. We wanted to provide a new vision for the campus that could bring in new activities and, at the same time, help with their troubled finances. Instead of providing renderings of how it would look, we wanted to show how it could operate. So neither the model nor the images focused on details and stayed on the conceptual side, with the goal of conveying the need of introducing programs from the city on campus. On most of our projects, although we produce some quick models as design tools, we use a lot of diagrams, photomontages and quick renderings to discuss our ideas with the clients. The emphasis has been in establishing a clear story and most of the time that translates into some sort of booklet or publication.

I was intrigued by your observation in the latest issue of MAS Context in which you write,

Lifestyles and living ideas are implemented in society through visualization more often than by directly experiencing physical space itself. We looked into the different ways living is represented, from constructed photographs, to real or fictional stories in films, futuristic storylines in comics, or data visualization.

Can you expand upon this? Do you have examples of the ways in which cinema, photography and other visual media influence the design of lived spaces?

In the Living issue of MAS Context we were really interested in exploring the influence of visual media in either representing or shaping living trends. It is clear that, while a certain amount of people are able to visit a specific building, many more will experience buildings and spaces through images or films. And those images and films are not just a documentation of the building or space, but are a story in itself, in which every element, human or built, is a contributor to the story. Borrowing the title of the book by Joseph Rosa on the work of Julius Shulman, his work is “a constructed view”. That’s why for that issue of the journal, we were interested in the work of Shulman, one of the most influential architectural photographers ever. His images spread the modernism of Los Angeles and California and introduced an innovative lifestyle to society at large. He shaped lifestyle more than the work that he was photographing by architects like Richard Neutra or Pierre Koenig. A different representation of lifestyle is seen in the film “Playtime” by Jacques Tati. In this case, it is a satiric commentary on the modern city and its lifestyle. Also, the film sets by Ken Adam, especially the ones created for the James Bond films, established how luxury, glamour, and power translated to living spaces. Like many others, they helped create and spread an image of what living should or shouldn’t be, whether real or fictional.

In your book Shanghai Transforming you describe Shanghai as a city with “seemingly boundless possibilities.” Yet a recent blog post of your picks up on the fear that there might be a real estate bubble in the city. Do you still feel that Shanghai is a city of boundless possibilities? What can cities like New York or Chicago learn from Shanghai?

Despite the current global economical situation, I still think that Shanghai is a city with enormous possibilities. There is an incredible energy behind it, a complex and long history of relationship with other countries (which allows for exchanges and mixes of cultures), and the will to succeed and become the best. And I think that is a critical point. Shanghai has a clear vision for the city in 2020, which is to become one of the world’s economic, financial, trade and shipping centers. All the actions taken by the city are geared to fulfill that bold vision. I think other cities could benefit from discussing openly their future, figuring out what they want to become, and establishing goals. Most often, cities do not make this effort and a lot of money and energy is spent in actions that do not add to anything. I actually think that Chicago is at an interesting point. While not being selected to host the summer Olympic Games in 2016, the effort has uncovered some strengths and weakness of the city, and I think now it is the perfect moment to amplify the first and address the second. Unfortunately, I see more defeat than momentum but I hope that changes soon. And often, the things that have the most influence in a city do not cost a lot of money.

In your urban planning, voids seem to play a prominent role. In conventional urban sociology, from Georg Simmel to Walter Benjamin to Michel de Certeau, the primary urban experience has been the unfolding of presences. What role do voids play in your urban planning?

As you say, they do play a prominent role. They are the areas of relationship, mixing of activities, where the interesting happens. Too often, the built area is defined to the extreme so it is in the void where there is relief, contact, fun, contrast…where things are less defined and the real urban experience happens. The work of the late Basque sculptor Eduardo Chillida is a reference in my work for his balance of mass and void.

Has teaching affected your design practice at all? If so, how?

I do think that teaching has affected in a positive way how I approach my work. In school, you are always challenged by students and you have to come up with techniques of explaining ideas in a simple way, so it makes you refine your design process. You are also surrounded by other faculty members that do great work and, all of the sudden, you are directly exposed to many ideas and possibilities that you were not aware of before. The academic world is a fantastic place to forget about some constraints of the professional world and cultivate some naïveté and positive attitude.

How is the Chicago Design Festival 2011 planning coming along?

The proposal is still in the early stages, but I am really excited about what can come from it. Sharon Haar, a colleague of mine at UIC, and I have been working on it for the last few months and we are almost ready to share with possible interested parties a more developed proposal than what we shared on the second issue of MAS Context, Events. We hope that it begins to build some interest and that we can see it happen, even if just in some small way initially. We want it to help start a conversation of the need to create a big design event where ideas can be shared and discussed. Producing unsolicited and speculative proposals is an approach that we are also taking with other projects and it is really rewarding. In the end, we try to be proactive, working on what we think it is good and not just what comes to us.