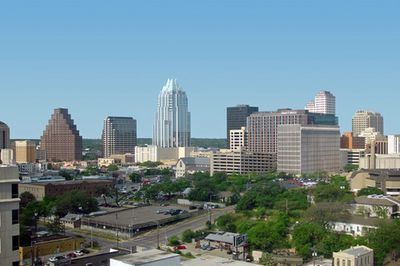 You ripped out your asphalt driveway and put in gravel. You dug up your lawn and replaced it with native landscaping, which you water from rainwater collection tanks. You installed solar panels on your garage roof. You’ve been composting since the Clinton Administration. So you’ve saved the planet, right?

Your small patch of it, yes. As for the rest of the 196,950,711 square miles of earth you’re going to need some help. If you live in Irving, Texas, you probably already know that. But let’s say you live in Austin, as James McWilliams does. They have recycling bins at the various SXSW festivals, so surely it must be a green city. McWilliams says it isn’t so. Austin’s “overall blueprint runs counter to a truly sustainable lifestyle,” he writes, adding,

Homes are large, if not steroidal, by the standards of densely packed urban centers like New York or San Francisco. Cars are a necessity. Sidewalks are maddeningly intermittent. Bicycle lanes and bus routes are haphazard. Sprawling “house farms” and strip malls ring the city. Air conditioners run full blast for seven months. Traffic snarls. We have no light rail or subway.

McWilliams’ Austin home is green certified, but he wonders how much good he’s doing in a city that’s voted down light rail twice. He suggests everyone read David Owen’s Green Metropolis: Why Living Smaller, Living Closer, and Driving Less are the Keys to Sustainability

. Owen’s major points are pretty much encapsulated in the subtitle, and his program very closely resembles New Urbanist positions on sustainable urban planning. But instead of looking for top-down solutions from government agencies or applying for LEED certification, McWilliams suggests your next steps for saving the planet are to buy coffee at a locally-owned coffee shop, buy a pastry from a local bakery, shake the hand of your town’s policeman, and send flowers to the nearest urban planner. In other words, as much as possible, spend your money while walking. This will support density, the key to sustainable urban planning. McWilliams is writing in the New York Times Freakonomics column, so I would imagine there’s some freaky economic data to show that is enough people walk on their errands Austin will gradually condense to the footprint of, say, Lubbock, but I’m sure the numbers are there someplace. Or you could buy Owens’ book.