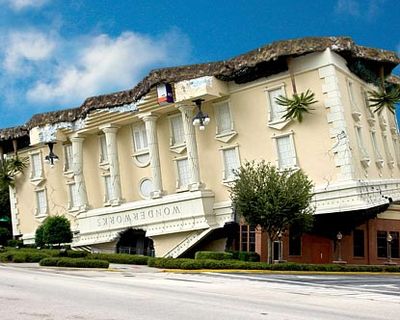 Fifty years ago no one would have imagined that Detroit would become a failed city. Though Motor City once furnished the sinews for the largest capitalist machine in the history of civilization, its viability lasted barely a few decades. The city came and went in less than a hundred years. Detroit has taught us that American cities are perishable. Fifty years from now a new Detroit could develop: Orlando.

Watching the stroller brigade march up the ramp into a Boeing 757 bound for Orlando, one would imagine the city is perfectly healthy. In many ways it is. But Orlando would be my nominee for the least sustainable major city in America.

Last week I spent several days shuttling back and forth between a hotel near SeaWorld and a large office complex. My hotel and the office were only about two miles apart as the buzzard flies, but walking would have meant plunging into a swampy landscape as foreboding as a Congolese jungle. Beyond the parking lot of the office building, a co-worker cheerfully informed me, was an alligator-infested swamp, only fifty yards or so from where we stood waiting for a taxi to take us to the airport. When we looked apprehensively across the parking lot, he hastened to add that he hadn’t seen an alligator himself. The vultures circling overhead weren’t reassuring, either.

Along the I-4 corridor on the southern end of Orlando, it is impossible to get anywhere in Orlando without getting in a car. There are sidewalks, but they usually lead either to four-lane roads or directly to the swamps. Sometimes in the afternoon I would look out the window to see a forlorn egret picking through the vast, and incredibly wasteful, expanses of sawgrass surrounding the office buildings.

I suppose the sawgrass lots were reserved for more development, but I would never make a long-term investment in Orlando. The whole place is predicated on cheap oil. Once the global economy revives and gasoline prices resume their climb to $4 a gallon and beyond, errand running in an Escalade becomes an expensive proposition, especially in a place where everything is a minimum of five miles from anyplace else. SeaWorld was across International Boulevard from my hotel, but it was a five-mile trek in a rental minivan to reach the gate. Getting to Orlando in the first place could very well become prohibitively expensive if airplane fuel prices start climbing again, as they’re almost certain to do eventually.

In an age of digitized entertainment, how long will central Florida’s theme parks last? Disney World will probably persist as a pilgrimage destination, but what about minor attractions like Wonder Works (above), which is little more than a collection of sensations? What’s the price point at which a Missouri family decides it’s too expensive to fly to Orlando? Who would still want to live there if all the air conditioners get turned off? Can Orlando sustain itself by trading in all its SUVs for Mini Coopers? What if the alligators eat the Minis?