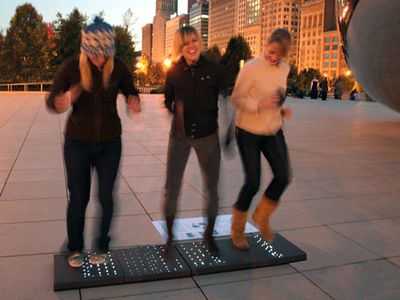 The latest issue of MAS Context is called ENERGY. The theme is playfully broad, covering everything from nuclear power plants to food to water dripping from a block of ice. ENERGY looks at how we generate and consume energy. The issue also demonstrates how our thinking about energy has changed over time.

To my mind the key text in the issue is “A Is for Atom,” a short film produced by the General Electric Company in 1953. The film opens with a mushroom cloud. “The atom age was born!” the announcer declares, no doubt scaring the wits out of a generation of American school children. He frankly acknowledges the dangers associated with atomic energy. “There’s no denying that since that moment the shadow of the atomic bomb has been a shadow over all our lives.” After its terrifying opening, the film hastens to introduce its main character, a cartoon scientist with an atom for a head. Sure, atomic power could snuff out all life on the planet, but aren’t atoms fascinating? Scientists couldn’t resist tinkering with them. Potential Armageddon was simply an unfortunate side effect of an ingenious quest to modify the building blocks of matter.

Scientists in these period films from the Prelinger Archive work to unlock the mysteries of nature with the focus and intensity of border collies. Before the atomic age, science produced “enduring miracles” that promised to “give us all what we need and want.” Splitting the atom, however, produced the first terminal miracle. This loss of innocence pervades all of the articles in ENERGY.

Recently a photographer named Mitch Epstein tried to snap a picture of a power plant in West Virginia. The FBI materialized and dragged him away for questioning. In his conversation with Iker Gil about American Power, Epstein’s photographs of power plants across the US, Epstein reports that he was detained several times by law enforcement and utility officials for photographing power plants. He tells Gil, “I carried with me this constant underlying anxiety, ‘Am I going to be
questioned? What will be the consequences of that questioning?'” There are clear hints of a dark conspiracy at work, although the harassment may also have had something to do with security concerns about a stranger poking around the American power grid.

One constant in our discourse about energy is the delight and wonder at the ingenuity of people working to solve our energy problems. Elizabeth Redmond invented a piezoelectric device while in design school at the University of Michigan. Her device is a sort of floor mat that generates electricity when people walk across it. Redmond claims her POWERleap (pictured above) can generate 10 Watts per square meter per hour. It’s a fun solution with all kinds of applications: sidewalks, airport terminals, my children’s bedrooms. Too bad no one walks anymore.

That Redmond is a designer rather than a scientist or engineer illustrates how our approach to solving problems has changed since the dawn of the atomic age. In “Oil for Aladdin’s Lamp,” a Shell Oil production from 1949, scientists were guys who fiddled with beakers and scribbled furiously on note pads in order to make better tooth paste. Now we have designers clutching computer mice, teasing new forms out of industrial products. Scientists produced miracles; designers produce beauty.

Sean Lally, founder of WEATHERS, an environmental design office, creates crystalline blob forms that can be used as stools or temporary green houses. They are intended to be used within nature, rather than as a tool to master it. Ecosistema Urbano’s Ecoboulevard was built in Madrid in 2007. I’m not entirely clear what it is or what benefits it offers, but I wish one would be built in Chicago. José Antonio Martínez Lapeña and Elías Torress designed a huge photovoltaic canopy for Barcelona. It’s a bold reinterpretation of alternative energy’s ugly duckling. While the Barcelona solar panels are entirely practical, realities:united’s Powerplants preen rather uselessly over the streets of Pasadena, California. The project is on hold, not surprisingly.

The importance of beauty in energy solutions is illustrated, in a backhanded way, by Marcel Wilson’s account of the transformation of the Hawaiian island of Lanai from a pineapple plantation to the power plant for the entire state. Once owned by the Dole Corporation, the island is now owned and operated by Castle & Cooke, a real estate development company. (Lanai must mean “monopoly” in Hawaiian.) Castle & Cooke wants to erect 200 windmills on the island’s northern shore. Resistance to the idea comes from both the island and beyond, not because windmills are more unsightly than pineapple plants, but because no one fully trusts a large American corporation. There’s no more innocence to the topic of energy any more. There’s only beauty, and not enough of that to go around.