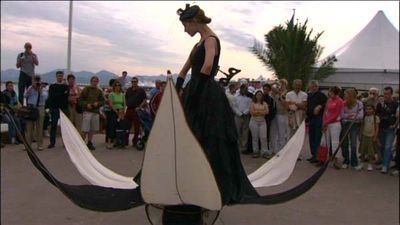 A man and a woman travel to Paris. She is tall and beautiful, with a fetching Scottish accent. He is sophisticated and English, dressed in hipster black. They check into a hotel with a view of the Eiffel Tower. They dine at a bistro. Later that evening they return to their hotel together. He climbs into bed expectant and a little nervous. She lays down beside him, fully clothed.

This sequence introduces us to the couple at the center of Hardly Bear to Look at You (2009), a rancorous title for a film about gentle disappointments. Jeremy Herman, who wrote the screenplay, stars as Daniel, a man of a certain age in love with a twentysomething street performer named Stella (Anna Neil). Daniel’s best friend is a film director named Hank, played by Huck Melnick, the director of Hardly Bear to Look at You. Hank is a sympathetic listener. He doesn’t have to remind his friend that he’s making a fool of himself in his pursuit of a much younger woman. All he has to do it listen to Daniel’s account of his relationship with Stella and hope his friend works it out for himself, because no one can help him.

Huck Melnick is an equally sympathetic and tactful observer. The director follows the couple around with a hand-held camera and calms records them walking repeatedly into walls of their own making. He departs from his usual relaxed Dogme 95 style twice in the film to comment not only on the desires of his characters, but also on our desires as viewers.

The first instance is the film’s opening shot, an extreme close up of a sleeping woman’s face. It’s Stella, but we don’t know that yet. We surmise that the shot is from the point of view of her lover as the camera lingers over her lovely face. Even after we’ve seen into every pore on her face the camera continues its inspection–the shot is over a minute long–crossing the line from scopophilia into something more obsessive and festishizing. It’s a relief when the shot is finally over.

The second instance of directorial intrusion occurs the morning after Daniel and Stella’s first chaste night together in Paris. Again Melnick cuts to an extreme close up, this time of Daniel’s eyes as he clumsily removes his contact lenses while standing in front of a mirror. The gesture is self-lacerating, as if he’s trying to poke out his own eyes. Daniel looks old and haggard. He’s around fifty years old but in this shot he looks seventy. It’s this shot, I think, that gives the film its title: “I can hardly bear to look at you,” Daniel seems to say to his reflection.

Besides their tight framing and erosion of visual pleasure, the two close ups are also unusual for their silence. This is a talky film. The couple spends a lot of time talking over dinners. (Neil in particular is adept at looking like she’s eating without chewing very much.) Daniel mutters vaguely probing questions to Stella, while she casually throws up warning signs like “Oh, I think I could easily go months without having sex!”

Daniel struggles to figure out a way around these signs, but he lacks the wit to break through her cloud of narcissism. His vanity is that he believes his mere presence will somehow change her mind. His obstacle is that his mere presence is all she wants out of him. “I like to be adored,” she tells him at one point before curtly reminding him of his limited access to her heart and body. When he finally articulates why he’s so dogged in his pursuit of her, she brushes off his gambit with a smile and a shrug. She doesn’t seem to understand what he’s talking about.

When Daniel finally tells Stella that the world appears brighter and more alive when he’s with her, we’re relieved for him and for ourselves. If he hasn’t broken through to her, he has to us. Neil is wonderfully charismatic as Stella, and while Herman is dignified and understated as an actor, he doesn’t have the screen presence to hold our interest for very long by himself. Neil can make stasis seem charming, but I got impatient with the dramatic situation Herman has constructed. It was hard for me to see how Daniel and Stella’s relationship would develop in a way that would remain true to their characters.

But just when the film has reached a dramatic impasse, something very interesting happens. A boom mike operator appears in the last moments of a shot. He’s on screen for only a few frames, but long enough for it not to have been a mistake. Besides, Melnick has already earned our trust as a competent craftsman. Shortly after this shot the film opens up in unexpected ways and becomes a different film. I won’t go into exactly how the film changes, but I will say that Stella’s occupation as a street performer becomes relevant, as does Hank’s role as a film director.

Hardly Bear to Look at You is a mediation on desire and on self-regard. It’s also a witty commentary on how cinema constructs romance. The film is a British production, and while it clearly borrows from contemporary Continental cinema, it remains clear-eyed and unpretentious in the best British realist tradition.

Clips and more information can be found on the producers’ My Space page. Details on a UK release should be forthcoming soon, and the producers are working on arranging US theatrical and DVD distribution. Keep an eye on this space for details as they become available.