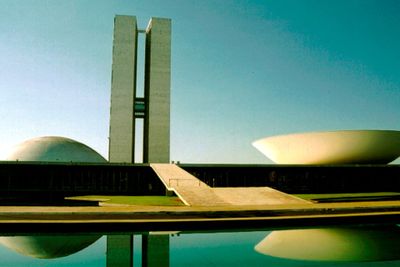 Today is the 50th anniversary of the dedication of Brasilia. Christopher Hawthorne wonders why we no longer build futuristic cities like Brasilia any more. Brasilia was a Modernist, Corbusian project. Its planners–Lucio Costa and Oscar Niemeyer chief among them–weren’t simply designing a new capital; they were constructing a vision of the future as crisply rational and unencumbered as Niewmeyer’s sleek buildings. Brasilia was to be a giant step forward in the Enlightenment project of constructing a perfect society. It was as if the entire country were going to board a Pan Am jet bound for a better life.

Entirely new cities are still being built, but as Hawthorne points out, they “tend to be marked more by wariness and anxiety — particularly about looming environmental disaster, terror attacks and global epidemics — than sweeping optimism.” Fifty years ago, architects and city planners struggled to come to terms with the past, which is why Brasilia was so audacious. Now urban planners are worried about their cities getting washed out to sea. “Architecture’s most troubled relationship is now with the future,” Hawthorne writes, “thanks largely to doomsday scenarios about what human activity might be doing to the planet. If there is a new International Style to replace the legacy that Costa and Niemeyer inherited, it is an anxious environmentalism.”

In effect, the future is now over. Modernism’s utopian dimension was its attempt to reconcile technological progress and social progress. That attempt failed, and the former continues to race ahead of the latter. For this reason, we have lost our faith in progress, “the greatest narcotic of the nineteenth century,” as Walter Benjamin described it. Enlightenment progress has given way to the reappearance of mythic violence: seas wiping away whole cities, the sun burning through the atmosphere, Icelandic volcanos projecting their wrath across Europe. In the future, we won’t be able to build any more cities deep enough in the jungle to escape.