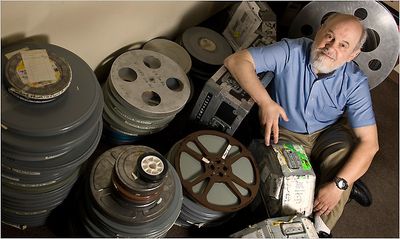 Mahola Dargis profiles David Bordwell, one of the founders of the discipline of film studies. Dargis, like myself, was a graduate student in film studies after its formative years, so paying a visit to Professor Bordwell is an unnerving assignment. She writes about Bordwell with the air of an awed student mumbling her way through a conference with a star professor. “If an undergraduate takes a single film class,” she writes, “it’s a good bet that one of [his] books will be on the syllabus.” Bordwell is the author of Film Art, still the best introduction to film studies ever written, and Film History, the second-best book of its type, after David A. Cook’s A History of Narrative Film

. Bordwell is also the author of The Classical Hollywood Cinema: Film Style & Mode of Production to 1960

, from which I cribbed virtually all of my lectures on the classical Hollywood style. Dargis calls the book “detailed, rigorous, monumental,” which could also describe everything Bordwell does.

It’s worth pointing out, though, that during her student days Dargis moved on from Bordwell’s relentlessly positivist approach to the murkier, but headier, realms of film theory, especially Jacques Lacan–a baleful, and intoxicating, influence on me as well. Dargis dismisses early youth forays into French theory as “blah blah blah,” for which her profile of Bordwell atones. But does she really want to see movies the same way he does? Does anyone?

Bordwell is a sort of viewing machine; not a single frame of worldwide film production escapes his gaze. His authority is grounded in the sheer number of films he’s seen. The curse of the film lover, like the book lover, is that one never feels like one has seen or read enough. Bordwell is something of a sage, however, rarely engaging in dialog with his fellow critics, none of whom, it’s safe to say, has seen as much as he’s seen. In fact, he tartly reminded everyone of this fact in his cranky Making Meaning: Inference and Rhetoric in the Interpretation of Cinema

. In his discipline, Bordwell is the king of Film Studies 101, but his influence fades quickly in the messier, and more impassioned, conversations that follow.

For all his empiricist rigor, Bordwell’s obsessive focus on primary texts can lead down some peculiar roads. For instance, Dargis reports that Bordwell is currently interested in blinking in movies. Dargis tries gamely to explain: “Eyes are an important expressive tool, imparting valuable information (joy, sorrow) that we register perceptually: blinking, in other words, is part of how a movie makes meaning.” Somehow blinking in movies is related to a book on why children are so cooperative. How is this train of thought any less loopy than Lacan’s parable of the tin can that stares back at you?

My best explanation is that Bordwell himself doesn’t blink, so he’s interested in people who need to reset their view of the world every so often. If you’ve ever imagined what it would be like to do nothing else with your time but watch movies, David Bordwell is the person you would become. You will become, like him, rigorous, disciplined, and unsentimental. No one will be able to disagree with you. You will watch a lot of movies alone.