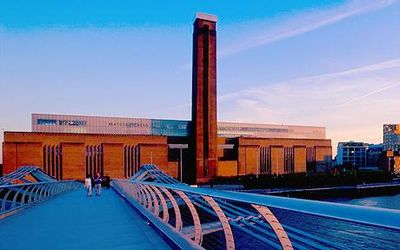 Much as the Houses of Parliament or Buckingham Palace once reflected back to our forebears the values that they hoped their nation would embody, so the Tate now throws back to us an idealised vision of Britain. We don’t so much like Tate Modern as hope to be like it: with its relaxed seriousness, its unstudied cool, its classlessness, its intelligence and its sense of play. It is a building that invites us to mould ourselves in its image, it is the most seductive role model we have.

It’s a truism that a house should reflect the personality of its owner. Implied in much Modernist domestic architecture is the proposition that the home should serve as a role model for its inhabitants. By the same token, a public building should convey an idealized vision of what an institution should be like.

What de Botton suggests, though, is that a public museum serves as a model for a citizen. He explains,

The attributes of the Tate are those of a prototypically admirable British person: it appreciates the burdens and privileges of the country’s aristocratic past without being overwhelmed by them, it is sympathetic to modern technology and yet retains a contact with tradition and faith.

To ascribe these ideals to a Modernist building is remarkable considering Modernism’s relationship to beauty. Equating beauty with personal virtue is an eighteenth-century ideal. It was a refutation of the deliberate artificiality of the Baroque, and it was superannuated by the technologies of mechanical reproduction and the deliberate ugliness of Modernism, starting with Baudelaire.

De Botton suggests that the Tate is a kind of modern cathedral, “a temple to the best of our contemporary selves.” There’s something to be said for de Botton’s claim that the Tate serves the same aspirational function as great ecclesiastical architecture. At the same time, though, a complementary claim could be made that something more recent, more elite yet more democratic, is going on: that it’s possible to revive the old Augustinian subject, ennobled by art and empowered by democracy, embodying the perfect aesthetic balance between the sensual and the reasonable.