For this week’s edition of Fun Friday–a semi-regular feature about worthwhile things to do, read, see, or listen to over the weekend–I’d like to return to the core theme of this blog, aesthetics and politics. 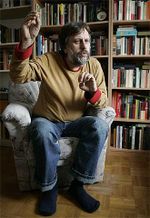 With uncharacteristic focus and restraint, Slavoj Žižek pokes a hole in The Hurt Locker‘s supposedly apolitical front. He points out that Avatar is a more honestly political film in that its sympathies are obvious. Kathryn Bigelow’s film, by contrast, purports to show soldiers simply doing their jobs in a war about which they don’t ask any questions. Žižek calls this “humanization” of ordinary soldiers “deeply symptomatic” in that the soldiers don’t kill anybody; they merely go about dismantling bombs meant to kill other people. “Can there be anything more sympathetic to our liberal sensibilities?” Žižek asks. “Are our armies in the ongoing War on Terror (aka The Long War), even when they bomb and destroy, ultimately not just like [Explosive Ordnance Disposal] squads, patiently dismantling terrorist networks in order to make the lives of civilians safer?” For Žižek, the “just doing my job” approach to warfare means “ideology is here, more than ever: We are there, with our boys, identifying with their fears and anguishes instead of questioning what they are doing at war in the first place.” 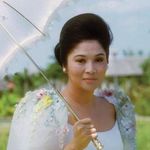 . For most of the interview Byrne explains how he became interesting in Marcos. Her whole life was a sort of B-side Talking Heads song. The interview takes an interesting turn after Byne comments on her infamous claim that it was her “duty” to give guidelines for the poor to live out their dreams. For Byrne Marcos is emblematic of the cynical, narcissistic side of celebrity. (Anybody want to talk about parallels to Sarah Palin? Is she our Imelda Marcos?) As for the political dimension of celebrity and its expression in Here Lies Love, Byrne demurs, explaining, “I think there is a little bit of [art and politics in Here Lies Love] but it is really the story, for the most part, it’s the story of these people. I mean the characters. I think it’s really hard to make songs that pursue an agenda. You can kind of do it a little bit through a character, so the character gives voice to something or their story, the story of the character tells you something, but, for me anyway, it’s really hard to write directly about politics.” The follow up question not asked: Isn’t that the whole point of art–to depict the abstract through particular metaphors? 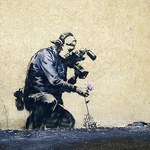 The question of graffiti’s claim to the status of art has been resolved: Some of it is criminal defacement of property, some of it is art. However, as Exit Through the Gift Shop proves, graffiti art has surrendered its outsider status and, with it, any claims to authenticity. Graffiti art has now been so thoroughly co-opted by the international art market that it’s become just another node in the culture industry. Some people have claimed that Exit is a hoax, that there’s no way a Frenchman who’s a cross between Errol Morris and Inspector Clouseau can conjure up an exhibit of his own graffiti art and make a fortune. But the film isn’t a hoax. It’s credited to Banksy, the British graffiti artist, and watching the film is a lot like looking at graffiti art: it’s witty and fun and has a faux-edgy buzz to it, but nothing good can come of it, either artistically or politically, at least not anymore. The film has opened in Chicago and other graffiti-scarred cities across the country.