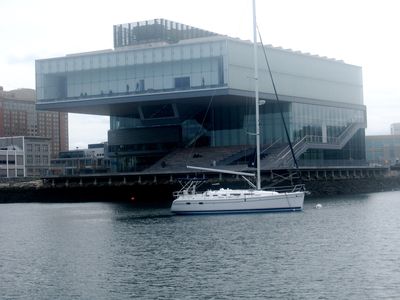 Last week I spent a few days in Boston, mostly walking around the city like a flâneur. My first morning there I set off from my Back Bay hotel to the Institute of Contemporary Art, which was designed by Diller Scofidio + Renfro, their first building in the United States. It was completed in 2006.

For a city that calls itself the most walkable in the country, the ICA is surprisingly pedestrian unfriendly. The museum is located in the Fan Pier area south of downtown. I walked through a warehouse and loft district where the functions of buildings aren’t clear. When approached from the street, the ICA seems to be just another anonymous dockside building. The street side entrance is little more than a car drop off. You’d never know you were approaching the first new museum built in the city in a century. The ICA’s relationship to the street is perhaps the worst of any major public building I’ve ever seen. It’s like the back of a garage. The building turns its back on the city, and vice versa. In a tradition-bound city such as Boston the contemporary is marginalized, almost in exile, like an apostate from Puritan days.

I guess you’re supposed to approach the building from the harbor walk from downtown. From the waterfront you can see the structure’s signal design feature: its top floor cantilevering toward the harbor. Diller Scofidio + Renfro allowed themselves exactly one historical reference, which is the decking on the harbor side of the building. The setting’s history is otherwise ignored. The Fan Piers were the point at which the railroads met the harbor, the engine driving Boston’s nineteenth-century industrial boom. Next to the ICA is a sort of Long John Silvers-type of seafood restaurant, complete with a model locomotive parked in the driveway, its crass historicism mocking Diller Scofidio + Renfro’s pristine forms. The ICA, meanwhile, abstracts the harbor into a view, into a purely visual element, in the Modernist fashion.

Most museums stage a sequence of spaces mediating between the street and the art. In contrast to art galleries, in which you enter the exhibition space immediately, museums usually require you to climb stairs up to a lobby. Entering an art museum means taking part in a ceremonial transition from the masses to the public. The ICA remains faithful to that tradition, but it does so in a surprising way. It was at this point that the building began to win me over.

You depart the rather unremarkable lobby to the galleries via a huge glass elevator. I know glass elevators are a shopping mall cliche, but this is different. It’s disorienting to exactly the right degree. You don’t know where to stand, yet it ascends through the center of the building with all the grace and dignity of a grand staircase in the Beaux Arts tradition. There’s no mistake that you’re being prepared to view art, a public treasure worthy of respect.

Inside the green-clad walls of the gallery spaces, there’s a nice balance between hipster minimalism and sensuous pleasure. You’re constantly aware of your place in the building you are. Partly this is a function of the architect’s bold design, partly an effect of the museum’s modest scale. There are two well-defined galleries on the top floor, and that’s about it for exhibition spaces. The second and third floors hold classrooms and a theater, both of which were closed when I was there.
The ICA galleries are among the most lucid I’ve seen. When I visited the west gallery featured the work of Roni Horn, a versatile artist deeply influenced by Emily Dickenson. Horn takes Dickenson’s tight dramas and flattens them out into pure seriality. Horn’s art is a sort of Asberger’s view of the poetry, yet in the industrial context of the ICA, the artworks also comment on the repetitions of a post-industrial landscape stripped of symbolic meaning.

If the ICA galleries can reveal the depth and breadth of an artist’s work, they can also expose the shallowness of an artist’s work. Jerónimo López Ramírez struggles to fill up the smaller east gallery with interesting art. The Mexican artist tries to pass himself off as a kind of tattoo artist who’s read Levi-Strauss, but mostly what he displays is his vivid fear of all things associated with the female body.

Anyone who is witless enough to have their sensibilities offended by López Ramírez will be soothed by the cafe in main the lobby. The cafe offers a fine view of the harbor. Norah Jones, the aural equivalent of Monet, plays more or less constantly. (Why do even the most cutting edge museums always play the most anodyne music in their restaurants?) The cafe was pleasant enough to make me forget that it took longer to walk to the museum than it did to walk through it. Despite its remote location and modest aesthetic offerings, the ICA is a destination location. But drive there. Don’t walk.