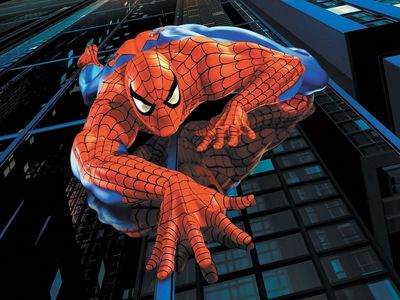 That comics continue to exist in any form is cause for wonder. Comic books flourished during the classical Hollywood era because they offered visual experiences that movies couldn’t match (i.e., violence, highly stylized worlds) to audiences under served by the cinema and television (i.e., kids). Now that the comics’ audience is also the core audience for Hollywood, the only reason why the former should persist is that comics offer an emotional experience that movies can’t match.

But what about movies based on comics? Hollywood has raided the comic book canon to fill its summer blockbuster schedule. But in the 32 years since the release of Superman, the Movie, Matt Zoller Seitz argues in Salon, “The comic book film has become a gravy train to nowhere.” Whatever pleasures comic book films have offered over the years, they have been isolated and fleeting. Mostly, comic book films are just industrial products rolling off an assembly line.

Even at the peak of their creative powers, big-budget comic book films are usually more alike than different. And over time, they seem to blur into one endless, roiling mass of cackling villains, stalwart knights, tough/sexy dames, and pyrotechnic showdowns that invariably feature armored vehicles (or armor-encased men) bashing into each other.

To illustrate how monotonous and predicable the genre has become, Seitz compares the comic book film to the zombie film, which is several levels below comics on the genre respectability scale. For one thing, the zombie film offers complex ethical dilemmas. Is it OK to kill a loved one just because he’s become a zombie and wants to eat you? The comic book film, by contrast, just presents “boxing robots.” The ethical stakes are always very small.

Seitz points to The Dark Knight as the exception that proves the rule. In the comic book film being the love interest of a superhero is a surprisingly safe position considering their level of contact with diabolical criminality. Gwen Stacy keeps popping up in every film adaptation of Spider-Man, even though her comic book self perished in The Amazing Spider-Man #121. The Dark Knight, on the other hand, dared to kill off Rachel Dawes, a “rare example of a superhero film daring to make its audience hurt,” Seitz says. “The superhero movie too often avoids opportunities to summon tangled feelings, lacerating trauma and complex characterizations — qualities that make genre films worth watching and remembering for reasons beyond their capacity to kill two hours and change.” Even The Dark Knight has problems, according to Seitz, including Chris Nolan’s antic camera work and Christian Bale’s “smug and cranky” Batman.

Everything Seitz says about the comic book film could also be applied to sci-fi, the genre that helped spawn the comic book film. (The 1978 Superman followed quickly upon the heels of the original Star Wars.) Only the fanboys and girls can tell them apart. Praise tends to be qualified, as in “the best Star Trek movie yet.” Any flicker of emotional complexity is instantly dispatched into the void of space. No one bleeds in sci-fi films. No one suffers–neither the heroes, nor the audience.