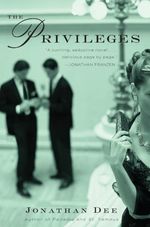 Toward the conclusion of Jonathan Dee’s novel The Privileges

, Adam Morey tells his wife Cynthia, “We succeeded. We’re Year Zero.” Cynthia has no doubts about this matter herself. The Moreys are billionaires, well established in New York’s rarefied sphere in which people do nothing but process vast sums of money. Nevertheless, in one last outburst of passion, Adam hammers the point home. “Baby, we didn’t just succeed, we’re a fucking multinational,” he tells her over the phone. “We’ve trademarked ourselves. It doesn’t get any more solid than us.”

Although the Moreys have been relentlessly pursuing wealth and social status from the beginning of their story, the terms by which they define their success are nevertheless jarring. One way to read the Moreys’ definition of themselves as a brand is to categorize The Privileges as a satire and, consequently, to frame an interpretation in primarily moral terms. Most of the novel’s reviewers have taken this approach. James Wood, for instance, describes the novel as a “savage satire” about “moral invertebrates.”

What struck me, however, wasn’t that the Moreys lacked “a moral tether,” as Wood puts it, but how empty they are. Dee’s vision, I think, isn’t about a couple that has somehow deviated from accepted norms. Rather, the Moreys are the perfect embodiment of their time. More interestingly, the narrative structure of The Privileges enacts the same process the central couple undergoes. The novel enacts the narrative logic of the commodity form itself.

Dee’s novel tells the story of a young couple in New York who begin in accumulation and end in pure exchange. This process also describes the transition from high capitalism–the era of Balzac, with his delirious piling on of narrative details–to late capitalism, our own era of opaque financial vehicles creating wealth even as value vanishes from the economy at large.

The Privileges begins with Adam and Cynthia’s wedding in Pittsburgh. Dee relishes all the details of ordinary people suffering in formal attire during a heat wave. Dee describes the sweat on the bridesmaids’ dresses, the menus at a private club in the provinces, the bride’s half-sister simmering resentment. Later, during the Moreys’ early marriage and parenthood, we’re treated to marvelously detailed moments: Cynthia scrawls a vulgarity on her resume and passes across the desk to the woman who’s interviewing her. Their pre-schooler son Jonas keeps a secret box of purloined objects, including a figurine stolen from his father’s boss’s weekend home.

However, as Adam becomes more successful–starting with insider trading and ending with his own hedge fund–the particularities of the Moreys’ world start to fall away. In the early chapters we know the exact layout of the children’s room. By the end, the Moreys live in a space simply known as “the townhouse.” A Patek Philippe watch becomes “April’s cell phone” or “the jet.” Adam’s hedge fund is unnamed, as is the philanthropic organization Cynthia runs in order to keep capital flowing.

The Moreys have moved beyond brand names, domesticity, experiential particulars, and their own pasts. They hurl themselves from one empty moment to the next. When Cynthia has to visit her dying father, she refuses to revisit old grievances. The narrator says, “Each moment only bore on the next one and if you were going to be successful in this life, that was the plane on which you had to live. If you started going on your knees to the past, demanding something from it that it hadn’t given you the first time around, you were dead. She asked for nothing from it.”

Cynthia and Adam may be unburdened, but they’re not free. Their first problem is that they have so much money they no longer have any desires. Financially secure for life, Jonas and his older sister April only have to worry about what to want. April in particular worries, with good reason, that she won’t be required to do anything for the rest of her life other than consume for the sake of consuming. She would be better off simply setting fire to her cash, but her parents, with a touch of obsolete moralism, insist that some good must be done with wealth. Hers is a weird existential fate, one indicative of our time: condemned to buy endlessly.

Free from want, the Moreys’ lives are nevertheless shaped by a primitive determinism. They’re bound to deep symmetries. The closing chapters may be free from detail but the narrative form becomes explicit. Jonas and April suffer simultaneous crack ups, each getting knocked unconscious in the pursuit of what shreds of desire they can conjure up for themselves. Meanwhile, Cynthia closes off the past attending to her terminally ill father as Adam confronts the future during a visit to a factory in China. The hospice produces death; the factory produces commodities. It’s all the same. April’s experience is the same as Jonas’s. Everyone lives in a world governed by pure exchange, consigned forever to either benefit from the structural properties of the commodity form, or to suffer the form’s primitive, irrational violence as it reasserts itself.

The alternation of pleasure and violence was the fate that Walter Benjamin had predicted for Western culture governed by commodity exchange. He also believed the boredom and emptiness were fertile grounds for sudden illumination and real change. However, Dee addresses that possibility, then seems to dismiss it. In The Privileges the human can only survive as madness. But as Jonas’s art history professor reminds us, even madness can become a commodity in the form of art. “There’s some end-times shit,” he says about the Moreys and their production and dispensation of wealth. And yet, the pursuit of authenticity in art is no different, the professor acknowledges, adding, “this is some end-times shit, too, what we’re doing. I mean, what we’re studying here, what comes after it? That desire to feed off of every new expression of what it is to suffer and be human, that need to seek out the unfamiliar and make it familiar, it’s like a goddamn fox hunt, and over the centuries it has narrowed down to this”–the appropriation of art made by an autistic savant for the international art market.

An autistic artist is the last human because for him everything is exactly the same. Art is the same as the real, emotions pass without notice. Jonas is nearly killed trying to buy a piece by the artist at the conclusion of The Privileges. He survives, wiser only in the sense that he’s learned not to desire authenticity any longer. It’s from his point of view that he get the final lines from the novel, spoken rhetorically to his absent girlfriend: “Let’s buy ourselves new identities. My treat.” The narrative transformation is therefor complete: Jonas will reproduce his father’s life, but without as accumulative phase, as the replication of pure commodification.