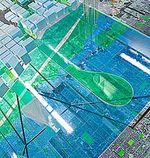 UrbanLab’s proposal to build eco-boulevards throughout Chicago, first publicly revealed in 2007, still has life. The proposal is a finalist for the 2010 Buckminster Fuller Challenge, sponsored by the Buckminster Fuller Institute. Finalists are required to provide “workable solution to one of the world’s most significant challenges such as water scarcity, food supply, and energy consumption.” Specifically, the eco-boulevard proposal “re-conceives the Chicago street-grid as a holistic Bio-System that captures, cleans and returns wastewater and storm-water to the Lakes. This model could be instrumental in how cities around one of the largest bodies of fresh water operate as mindful gatekeepers of a critical resource.”

The eco-boulevard proposal has picked up other awards, and, at one point, it was part of Chicago’s 2016 Olympic bid. Eco-boulevards were central to UrbanLab’s vision of Chicago in the 22nd century, and they continue to attract attention because of concern about the health of the Great Lakes.

UrbanLab’s ideas about recycling water have been percolating on a small scale. However, at this point it’s hard to tell if fully-fledged eco-boulevards will ever be built. Their inclusion in Chicago’s ill-fated Olympic bid was more thematic than realistic. While eco-boulevards fit into a vision of a “blue-green” Olympics, there was never any indication that the city was ever serious about building any as part of the 2016 Olympics. Meanwhile, the state of Illinois is billions of dollars in debt and the federal stimulus package has already been allocated to more mundane projects. Of course, 2106 is far into the future, but in the near future it’s hard to imagine consensus coalescing around any major public project no matter how beneficial to the common good.