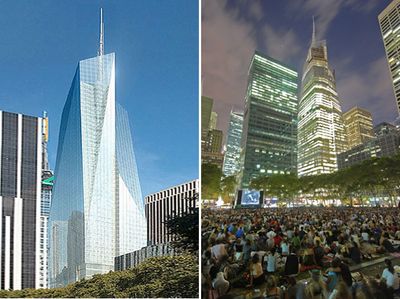 This has been one of those weeks where very little appeared that captured my interest enough to comment at length, but here are items that are worth a second look.

Congratulations go out to Iker Gil (MAS Studio and the journal MAS Context) for winning the 2010 Emerging Visions Award from the Chicago Architectural Club.

If you’re planning a vacation in Laos, stop by Vieng Xai, an underground city where the Pathet Lao leadership hid from American bombs during the Vietnam War. No worries about lingering resentment about nine years of bombing. “We had the war, we got independence. We are friends with everybody [now],” says Saly Phimphinith, the director general of the National Tourism Administration.

Previously on Fun Friday I reported that a cache for Franz Kafka documents were found in a Tel Aviv apartment filled with feral cats. Eva Hoffe, the daughter of Max Brod’s secretary, says her apartment has been broken into three times recently. Some of Brod’s documents have been stolen, but Hoffe isn’t sure if any, or all, of the Kafka documents have disappeared, too. Exactly how the papers of a giant of twentieth-century literature ended up in an elderly woman’s squalid apartment in a crime-infested neighborhood is a long story; the documents are probably supposed to be in the National Library of Israel. As yet, none of the feral cats are suspects in the thefts.

Alec Appelbaum doesn’t mention the controversy over Frank Gehry’s disparaging remarks about LEED certification, but he puts the matter into perspective. LEED is neither bogus nor political; it’s a marketing gimmick. To understand LEED, consider a bike rack in outside 1 Bryant Park (above), the second tallest building in New York and the first LEED platinum skyscraper in the US. A bike rack counts toward a LEED certification, and a LEED certification allows developers to charge higher rents. However, the presence of a bike rack doesn’t mean anyone is actually riding a bike to work. LEED now requires annual reports on energy consumption, but it’s nearly impossible to calculate how much energy is saved when people commute by bicycle. In short, LEED is a guideline and a prediction for future energy savings.

There are some signs that the worst may be over for US architects. The AIA’s the Architecture Billings Index has increased for the third straight month, up from 46.1 in March to 48.5. Billings are highest in the East and lowest in the West, with the Midwest and the South falling in between.

By all accounts, this year’s Cannes Film Festival has been mildly depressing: disappointing movies, creepy people everywhere, Jean-Luc Godard nowhere. The best dispatches can be found in Roger Ebert’s blog and his Twitter feed. Sample tweet: “I walk slowly down the sidewalks of Cannes, mouth agape. I must have seen people like me here years ago. What did I think?”