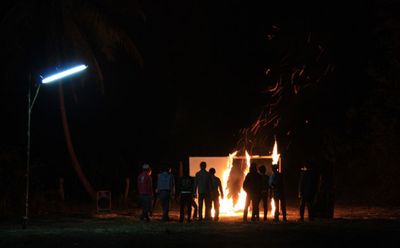 Apichatpong Weerasethakul’s film Uncle Boonmee Who Can Recall His Past Lives was one of the highlights of a relatively lackluster Cannes. Uncle Boonmee was an exception to the undercurrent of unease in the festival’s selections: religious fundamentalism was a recurrent theme. The film also helped counter the common view of Asian cinema at Cannes as something affectless and opaque. Until Uncle Boonmee makes it to general release in the English-speaking world, the closest anyone who didn’t attend Cannes can get is the British Film Institute Gallery’s screening of Phantoms of Nabua, Apichatpong’s atmospheric photographic portrait of a town in north east Thailand. Weerasethakul describes the video exhibit as “a portrait of home … a communication of lights, the lights that exude on the one hand the comfort of home and, on the other, of destruction.” The exhibit runs through June 3.