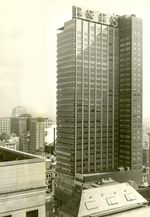 Blair Kamin, the architecture critic for the Chicago Tribune, partakes in the “long tradition in journalism when your hometown team is playing for a
championship[, you] good-naturedly trash everything about the other city.” The Chicago Black Hawks will face the Philadelphia Flyers in the Stanley Cup finals. I have no idea which team is favored to win, but Kamin claims Chicago clearly wins the architectural sweepstakes. It’s no contest, he says, given Chicago’s “long record of leadership in everything from
skyscrapers to city planning.” At the same time, Kamin points out that many of Philadelphia’s iconic structures were designed by Chicagoans. For instance, One Liberty Place, Center City’s most striking skyscraper, was designed by Helmut Jahn.

Speaking as someone who has lived in both cities (grew up in Chicago, lived in Philadelphia for 11 years before returning to Chicago), Kamin is certainly right that Philadelphia can’t really compete with Chicago in Modernist and contemporary architecture. A Philadelphia architect friend of mine used to complain about how conservative the city was in terms of design. He said the city’s most prominent working architect, Robert Venuri, just mailed in his design for a concert hall that later became the Kimmel Center. Inga Saffron’s remark about how “Philly is so retrograde that people still like po-mo” is dead on.

That doesn’t mean that Philadelphia can’t lay claim to any ground-breaking Modernist designs. Kamin neglects to mention the PSFS Building, designed by two Philadelphia architects, William Lescaze and George Howe. Completed in 1932, the PSFS Building was the first International Style skyscraper built in the United States. Only the Inland Steel building and Mies van der Rohe’s Lake Shore Drive apartment buildings in Chicago can match the PSFS Building as examples of Modernist elegance.

If Philadelphia can’t match Chicago in major commercial architecture, Philadelphia beats Chicago in residential architecture built before 1930. Residential architecture has made a comeback in downtown Chicago, but only exclusively in the form of highrise apartment and condo buildings, very few of which are distinguished in any way. Philadelphia’s Center City is still a gracious residential district, with perhaps the best mix of commercial and residential properties of any major American city. Only San Francisco and Boston come close. Chicago doesn’t have any neighborhood that compares with Chestnut Hill on the far northwest side of Philadelphia. Inspired by the turn of the century Garden City movement, Witold Rybczynski once described Chestnut Hill as the best urban neighborhood in the country.

Most tourists experience Philadelphia as an eighteenth-century city, but it’s really a nineteenth-century city. By the Modernist era, the city was already starting to decline as it was eclipsed by New York City. Meanwhile, Chicago flourished because it was the dominant city in the Midwest. Philly isn’t in decline any longer, and Chicago doesn’t dominate as it used to, but the legacies remain.