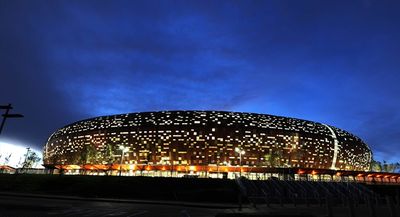 Like a good portion of the world, I will be watching the US-England World Cup match on Saturday. I’ll be steering clear of my English brother-in-law, who is still seething over Team USA’s defeat of English in the last World Cup. (I didn’t see that match, but I did watch Italy beat France in the 2006 World Cup final in a small village in Le Marche, still one of the most memorable travel experiences I’ve ever had.)

The US drew a tough group in the 2010 World Cup, and Team USA will miss the best stadiums in South Africa, at least in the group stage. Saturday’s US-England match will be played in one of the smallest and least interesting stadiums, Royal Bafokeng in Rustenburg. Next team USA will play in Johannesburg’s Ellis Park, the scene of the famous victory over New Zealand in the 1995 Rugby World Cup, a triumph depicted in Clint Eastwood’s film Invictus. The US will then play Algeria in Loftus Versfeld Stadium in Tshwane/Pretoria. Like Ellis Park, Loftus Versfeld is a refashioned rugby stadium will plenty of history but not much design flair.

Should the USA advance to the round of 16, they could play in much more striking stadiums: Cape Town’s Green Point Stadium, a sleek white bowl completed in 2009, and Durban Stadium, with its Calatrava-style arch. Should Team USA make it the finals, they will visit Soccer City in Johannesburg (above). The extensive stadium renovation was designed by the South African firm Boogertman Urban Edge + Partners, with help from Populous, an American firm formerly knowns as HOK Sport. The stadium design was inspired by the calabash, an African clay pot, but the design also clearly owes a debt to the Bird’s Nest stadium in the 2008 Beijing Olympics. From the photographs it looks like a spectacular stadium. It would be great to see it in greater detail on television, with Team USA on the field.