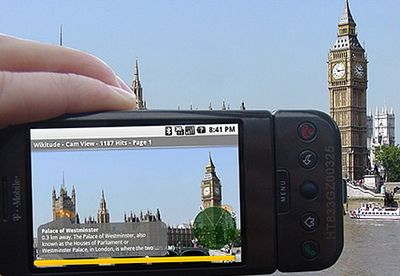 A few months ago the New York Times ran an article about how people can’t walk and talk on a cell phone at the same time. Exhibit A was a young woman who collided with a truck while talking on a cell phone with her grandmother. The truck was parked. The women suffered a lightly dinged head and broken fingernail.

Mobile gadgets are frequently blamed for distracting urbanites from their immediate surroundings, for making email and music seem more important than the variety of experiences presented by the city. However, there’s a lot of evidence that people don’t pay much attention to their surroundings even when they’re not using smart phones and iPods. Researchers at Western Washington University rode around on campus on unicycles dressed as clowns. Only about half the people walking past by themselves said they had seen a clown, although the number was slightly higher for people walking in pairs.

If people barely notice a clown on a unicycle riding right past them, does that mean that Walter Benjamin’s type detailed attention to urban phenomena is lost forever? How do we even talk about urban experience in the age of the iPod playlist and iPhone augmented reality app?

In a two part essay on the Design Observer site, Mitchell Schwarzer considers how Internet technologies like augmented reality apps and social media sites have recast our sense of place. Before the Internet our sense of place was divided into two realms: sedate, highly localized small town experience and high-stimulation, globalized urban experience. Schwarzer argues that the Internet imposes another layer upon urban and small town experience alike. The mobile Internet blurs the distinction between direct and mediated experience, while social media applications create little hot spots of personal significance. We will no longer experience the extremes of dislocation such as those depicted in Alberto Lattuada’s film Mafioso (1962), in which a Milanese engineer travels to rural Sicily, then is shipped to New York City in a packing crate to murder a man in an anonymous barber shop.

Now the streets of New York City and the hills of Sicily are equally accessible to us. There’s no such place as nowhere anymore. Schwarzer writes,

it seems to me that we are moving into nothing less than a new epoch of
social relations — when we will be neither the community member embedded
in his or her tribe and place nor the individual floating or flowing in
placeless society produced by omnipresent yet unapproachable elites.
Via Social Networking and Augmented Reality, we are finding options for
gaining and communicating knowledge in any given place expanded beyond
the constraints of olden and modern times. We always know where we are
and what we’re seeing. We are somewhat aware of who is assisting us and
how they intend for us to experience, value and own, to varying extents,
the place at hand.

As with all assessments of new technologies, Schwarzer overestimates the short-term impact of technology. I’ve used several of the technologies he mentions. The view of Evanston, IL near the Northwestern University campus offered by Wikitude and Layar consists primarily of Starbucks lurking everywhere, like green and black cockroaches. Phenomenal reality is stubborn, and social media still too diffuse and placeless to have much impact on everyday perception. However, generally the long-term effects of technology are often underestimated, and one day you may find yourself on a street in your home town, iPhone in hand, knowing precisely where you are on the planet, but unable to take a step forward without satellite guidance.