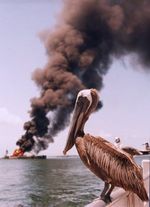 Yesterday I rode my bicycle past a BP gas station. Almost every pump station was occupied by a hulking SUV, an enormous pickup truck, or a minivan. Weirdly, and fittingly, all of the vehicles were painted oil spill black. My first thought was outrage: How can these people buy gasoline at a BP station? Have they no shame? Was that Joe Barton behind the wheel of a Dodge Ram 2500?

My anger was misplaced, I knew. BP doesn’t own the gas station in my home town, or any gas station anywhere, having abandoned the retail gas-selling business a couple years ago because it wasn’t profitable enough. Furthermore, because oil is a globally traded commodity, there is no easy way to confirm that the gasoline sold at a BP station was extracted or refined by British Petroleum.

Short of going down to the Gulf Coast and scrubbing oil off a pelican, what can an ordinary person do? Trading in a Toyota Sequoia on a Prius is a start, I guess, but how many people will feel moved by the plight of Gulf Coast birds and fishermen enough to do so? Can a global corporation really care about small people? Is there such a thing as a shared ethical dimension based on empathy? Matthew Taylor, the Chief Executive of the RSA and formerly a political adviser to Tony Blair, thinks so. In fact, he argues that a “reassertion of the fundamentally ethical dimension of humanism” is a cornerstone of what he calls a 21st-century Enlightenment. Following Jeremy Rifkin’s The Empathic Civilization: The Race to Global Consciousness in a World in Crisis

, Taylor argues humans can empathize not only with other people, but the biosphere as well. Empathy is hard-wired into our brains, neuroscience and evolutionary psychology tell us, although scientists have not yet verified that empathy exists in Tony Hayward’s brain. Taylor believes empathy can lead to a public discussion about how we share out natural resources. Which, of course, is a better solution than our current process, which limits the discussions to those people who are sleeping, literally and figuratively, with the US Minerals Management Service.

So far, the 21st-century Enlightenment has gotten off to a slow start: just a pamphlet and last night’s lecture by Matthew Taylor. There are problems with Taylor’s idea of a new Enlightenment, as he would be the first to admit. The path from empathy with a teary fisherman to support for a $1 a gallon gasoline tax is fraught with difficulty, to say the least. The first Enlightenment was about transcending the body and particular circumstance, while the updated version embraces the former as if it transcended the latter. But if there’s a way out from under the grip of implacable fanaticism and global hyper-capitalism, then we should all pay attention.