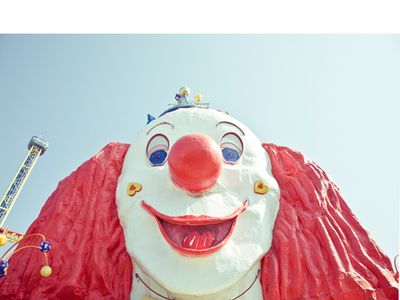 When I attended the MAS Context’s “Out of Context” event last April, there was a laptop set up so that people could enter what amused them. I was going to enter something until I read what other people had written. The other entries were brief and witty, unlike anything I had to say. It wasn’t enough to simply state what amuses me, I realized. I had to also be amusing while writing about what amused me. I got called away before I came up with a contribution, and I never did enter anything.

The entries gathered that evening appear in the latest issue of MAS Context, AMUSEMENT. Sure enough, the entries are amusing. What amuses you? “Most things, sadly…” admits Noël, while Gjudelman likes “3-year olds playing soccer.”

The entries made me wonder what is the nature of amusement. Is it something that must be experienced, lived through as a sequence of moments, then conveyed as a story? For example, Ben wrote, “Finding out that a co-worker thought that every chicken egg was a baby chick, and was shocked to learn that chickens lay eggs unfertilized. Telling that story to different co-worker, and finding out that he has been unwittingly fed fertilized eggs by his partner for years and never knew it, and is visibly grossed out.”

Or is amusement more conceptual, a species of irony, a way of seeing things? Barbara is amused by “how my labrador retriever has no interest whatsoever in retrieving anything.”

Reading the AMUSEMENT issue suggests that forms of amusement tend toward one definition or another. Take bowling, for instance. Mike Walsh finds bowling alleys amusing, but bowling itself isn’t particularly. Bowling alleys combine things that aren’t amusing in themselves–rented shoes, low-quality beer, second-hand smoke–into larger wholes that are amusing. Walsh decides to spend an entire year visiting at least one bowling alley in every state in the union. About halfway through his quest the American Bowling Congress decides to intervene and spoil the fun. Walsh is summoned to ABC headquarters, where a spokesman sternly reminds Walsh that real bowlers “train hard, suffer injuries and need to be as mentally focused as any other professional athlete.” The spokesman then demonstrates a fearsome-looking machine designed to bowl perfect strikes every time. Walsh escapes to a bowling alley to drink Zwiec beer and listen to the proprietor tell the story of the time a group of Catholic college students played a game of strip bowling.

Video game designer Jenova Chen isn’t satisfied with creating amusing experiences; he wants to create art. Chen studied film in college, and he has developed some idiosyncratic notions of film history. “Film didn’t really become an industry until there was an education in film,” he tells Andrew Clark in an interview, “until there were kids growing up with film, studying it.” According to Chen, the cinema combined all the older arts into one art. Video games then added interaction to film, thus becoming the crowning achievement of Western art. He declares, “the video game is this ongoing, evolving medium that human civilization finally achieved.” I won’t step into the video games vs. cinema debate here. Suffice it to say that Chen creates intriguing, if slight, video game experiences. His declared intent is broaden the emotional range of video games. His game Cloud is an antidote to the Grand Theft Auto franchise, which remains the genre’s Citizen Kane. Defying the conventions of mainstream video games, Cloud offers “no violence, no competition, no numbers, no points, no goals. Just focusing on a particular experience—clouds floating in the sky. Who doesn’t like the beautiful clouds in the sky, and who hadn’t dreamt they could fly among them?”

Matt Clark, co-founder and creative director of United Visual Artists, takes a more visceral approach to amusement through video imagery. Clark modestly describes the videos his company created for a Massive Attack tour as merely “adding layers to the band or artist.” His team built a video and light show based on the seemingly innocuous concept of information, yet their presentation was banned in Italy, which couldn’t have been easy to do. Like the cinema (but not video games), Clark’s visual experiences are social. He tells MAS Context editor Iker Gil his team’s installations forge an “intimate relationship of the single person experience between them and the work, then the group experience of discovering that you are part of making a greater whole and sharing this with other participants.”

But what happens to an amusement apparatus when all the participants have left? That’s the question the Spanish photographer Yosigo considers in his amusement parks series. (Sample image at top.) Walter Benjamin described how Eugène Atget photographed an empty Paris, creating haunting photographs in which the city “looks cleared out, like a lodging that is not yet found a new tenant.” The Surrealists picked up on this emptiness in order to show the estrangement of humankind from its surroundings. The same thing happens in Yosigo’s photographs of amusement parks after hours. His camera sees them as alien, foreboding landscapes, but also poignant and loaded with meaning.

Alien, foreboding landscapes are also the settings for that other great institution of summertime amusement, the comic book movie. Paul Butt stages a kind of superhero competition between Marvel and DC Comics for screen supremacy. The results parallel Matt Zoller Seitz’s remarks about comic book movies in interesting ways. Both reveal how the Superman franchise ran out of gas pretty quickly, while The Dark Knight made a huge splash and nearly revived the genre.

As the comic book movie demonstrates, amusement nowadays seems to be largely about technology. Even when we relate to nature, the relationship is structured by technology. Architect Joseph Altshuler re-imagines the backyard fence, perhaps the most common means of structuring nature. He proposes opening up the fence to allow for limited encounters between neighbors–a clothes swap, for instance, or an impromptu dinner party.

Another architect, Eduard Bru, considers the border between cities and the sea. He likes cities when they open themselves up to the sea, like Naples and Syracuse. His native Barcelona, on the other hand, “progresses each day with an excessive agreement between sea and city: there is so much mediation that you hardly perceive the water.”

Michel Foucault once claimed he found his intellectual calling while reading Nietzsche on a beach. This isn’t as odd as it may seem at first. Beaches are completely unironic spaces. They have to be experienced directly, but they don’t present themselves in a progressive manner so the experience can’t be transmitted to someone. You merely plunge in. That’s what amuses me.