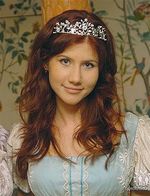 “Let’s just cut to the chase here,” Stuart Heritage writes in the Guardian film blog, “This story about the Russian spy-ring
living undetected in American suburbia will end up being turned into a
film. It has to be.” Heritage thinks the film will a comedy centering around Anna Chapman (at left, to be played by Amy Adams). Heritage’s suggestion makes sense, but I’m not so sure. Yes, a ring of Russian spies deep undercover in American suburbia has comic potential, but only if one of the suspects has Mark Whitacre depths of eccentricity. Otherwise, what is a potential film producer left with: A cranky guy with a talented pianist for a son? A Peruvian leftist? Montclair, NJ? None of this is intrinsically funny material.

On the other hand, the film has problems as a caper film as well. A good title might be Moscow’s 11 if there were any good action. From what we know so far, there doesn’t seem to be much. Evidently, the spies never actually spied on anybody. No classified materials were sent to Russia. The ring was supposed to eavesdrop on American “policy making circles,” which, for the most part, are as secretive as a clique of fifth graders. Do intelligence agencies ever set up spy rings for, you know, something to do? And why spy for Russia? What’s wrong–didn’t the North Koreans have enough hard currency? The story doesn’t come with too many dramatic moments: The cranky guy doesn’t get rehired to teach at Baruch College, and a banker and his wife have a spat with the S.V.R. over a two-bedroom ranch house. That’s about it. Not a Tom Cruise moment anywhere to be found.

Heritage doesn’t have any suggestions for a director, so let me make one: Christopher Hampton. He’s already directed an adaptation of Joseph Conrad’s The Secret Agent, which, with its combination of intrigue, futility and absurdity, is the nearest literary analogue to Moscow’s 11. I can see the opening scene: crosscuts between President Obama munching on a hamburger with the Russian president, Dmitri A. Medvedev, as F.B.I. agents swarm around a pretty redhead, played by Amy Adams.