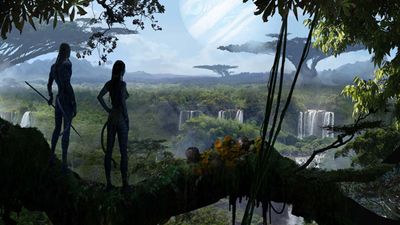 This past weekend I finally got a chance to see Avatar. (I’ve been busy.) Even though I was watching it in 2D–not the optimal format, I know–the film had me until I saw the big tree. Once I saw the huge tree with all the Na’vi fluttering around, I knew somebody was going to come along to blow it up.

Sure enough, a few scenes later a fleet of giant flying weed whackers arrives and opens fire at point blank range. (Evidently they ran out of cruise missiles.) In 3D the explosions must have looked great. In two dimensions, however, the scene looked depressingly familiar.

There is a certain type of film in which the filmmakers invest a great deal of effort in creating a wonderfully imagined world in rich detail. But once that task is finished, the filmmakers have no idea what to do with their world, so they just issue all the characters guns and let them shoot it out rather than try to formulate a story that grows organically out of the setting. The archetype of this kind of film is Paul Schrader’s American Gigolo (1980). Wes Anderson’s first film, Bottle Rocket, was like this, as were a number of American independent films in the 1990s. Quentin Tarantino has made an entire career with these films. In his case the only difference is that he creates worlds in which everyone already carries a gun.

Creating recognizable, believable worlds has always been a challenge for mainstream American cinema, which is why Hollywood films are so genre-centered. Genres come with built-in worlds. In Avatar James Cameron remains true to the sci-fi world, which has become thoroughly militarized ever since the original Star Wars. Perhaps this accounts for the humorlessness of the genre: everyone is a conscript.

. The contrast couldn’t be starker. I’m about a third of the way through the novel its world is still unfolding–not just the immediate setting of the novel, a small island in Nagasaki harbor in 1799, but the larger world of Dutch colonialism and trade. While it’s altogether possible that the muskets will come out before the end of the novel, somehow I don’t anticipate that happening–until the film adaptation.