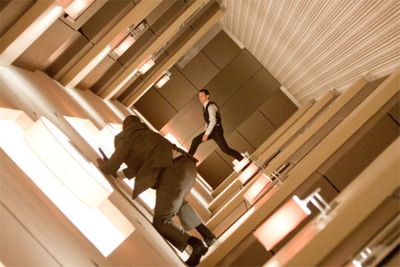 So that was Inception, eh? My Facebook cohort was agog over the film. Call me old fashioned, but I expected more surrealism, more along the lines of Luis Buñuel’s The Discreet Charm of the Bourgeoisie–something at once banal and frustratingly weird. I was disappointed to find that other people’s dreams aren’t filled with murderous versions of themselves, but with bits and pieces of action films. It’s as if Christopher Nolan has discovered a fourth psychical level, one below the Id, where thoughts of slaying your father and sleeping with your mother symbolize the desire to jump into a Buick and go play golf. Leonardo DiCaprio returns to his Shutter Island acting mode, playing a character with filled unimaginably complex torments, but nothing else, not even lust.

Nolan worked on the concept for Inception for ten years. I don’t know where he got inspiration for the film, but the idea of entering someone else’s dream isn’t original. In fact, it happens all the time during psychoanalysis. Jacques Lacan interprets the dream of the butcher’s wife in Freud’s Interpretation of Dreams as a kind of invasion by the analyst, in this case Freud himself. According to Lacan, the butcher’s wife’s dreamed that Freud’s interpretations of her dreams were incorrect. In effect, her unconscious mind was trying to kick out the psychiatrist. The butcher’s wife wasn’t trying to preserve her privacy–she was, after all, in therapy. Rather, she wanted to thwart the satisfaction of Freud’s desire to prove his theory of dream interpretation so that she could preserve her desire.

This isn’t far off from the scenario at work in Inception. Cobb wants to steal secrets, precisely those things that people keep in order to thwart others’ desires, and yet he wants to preserve his desire in the form of his dead wife, who keeps popping up in the dreamscape. To ensure that Cobb doesn’t get any closer to her, he makes sure she’s armed.

Or something like that. Ever the literal-minded action film director, Nolan doesn’t go down this path. He never seems to give any indication that he realizes the degree to which his audience has already entered his dreams.