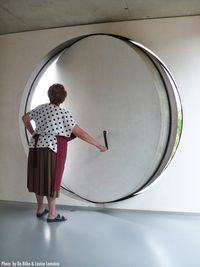 Last night the LA Times’ Christopher Hawthorne attended a screening of Koolhaas Houselife, a documentary film by Ila Bêka and Louise Lemoîne about a house located on the outskirts of Bordeaux, France, designed by Rem Koolhaas and OMA in 1998. The House, as it is known, was built for a wheelchair-bound owner, and the film focuses on a cleaning woman, Guadalupe Acedo, as she trudges through a space designed to create a frictionless experience. Upkeep is a major chore. The house is a little careworn, the roof leaks, and the cantilevered steel stairs are a challenge to clean. But Hawthorne notes that “the more Acedo talks about the house and its flaws, the more it becomes clear that she not only loves it but is prepared, in her own staunch and bighearted way, to defend it. She spends as many waking hours in the house as anyone, and she treats it with the same kind of affection — slightly exasperated but deeply genuine — we typically save for our closest relatives.”

and the severely idealized photography of architectural magazines. Bêka and Lemoîne’s camera follows Acedo as she attends to the house’s elaborate mechanical systems, especially the hydraulic lift in the center and the porthole windows that pop in rather than out. Louise Lemoîne is the daughter of the owners, and one can image her girlhood fascination with the house. With its moving walls and floors, its backstory, and its imperturbable cleaning woman, Koolhaas’s house is cinematic. Its meaning unfolds over time.

Koolhaas Houselife has made occasional appearances over the past two years, mostly in museums. You can buy the DVD version or wait for it to make its way to your local museum.