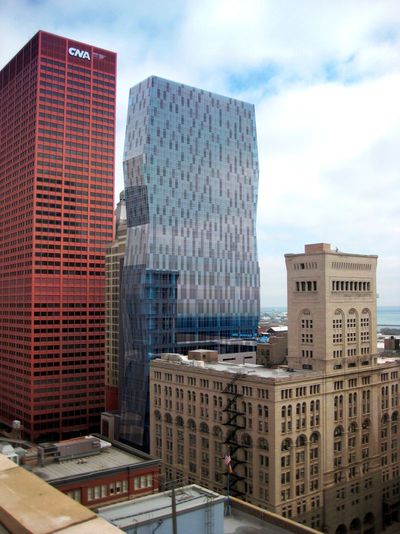 Since 1947 Roosevelt University has been housed in Louis Sullivan and Dankmar Adler’s Auditorium Building, located in Chicago’s South Loop. This summer the university has initiated construction of a 32-story academic and residential tower will rise to the north of the Auditorium Building. The new tower is designed by VOA Associates of Chicago and is inspired by sculptor Constantin Brancusi’s “Endless Column,” with the blue and green glass skin becoming gradually lighter as it rises. It’s scheduled for completion in 2012, which is enough time for someone to buy the naming rights to the building, currently referred to as “the Wabash tower.”

The building represents a departure from the traditional American university campus form of Gothic, medieval, Georgean and Beaux-Arts buildings placed in a village setting, reflecting the romantic ideal of education isolated in nature. From time to time universities have acknowledged their urban settings, of course. In 1867 Johns Hopkins University, for instance, was laid out in the same grid pattern as the rest of Baltimore’s city streets. But the average American college campus likes to pretend it’s really an English medieval college at the end of a freeway offramp designed by Erasmus.

Post-World War II universities have embraced the complexities of their settings, as well as of their educational missions. As enrollments and endowments increased, universities built out-of-scale dormitories, student unions, and laboratories–not to mention football and basketball stadiums. Still, these new structures, often designed by distinguished architects, merely filled in the spaces of traditional campuses and rarely challenged the notion that higher education was somehow separate from other spheres of activity. The old ideal of the privileged gem set in green space remains at even the most adventurous campuses.

The Roosevelt University not only has no green space (unless one counts Grant Park, across Michigan Avenue), it is barely distinguishable from its corporate surroundings. Its new tower is being constructed near the red CNA building, where my grandfather once worked. Roosevelt’s tower retains only two design features that mark it as an educational institution: its highly textured skin and elaborate shape reflect the complexity of modern educational endeavors, and its “Endless Column” form is a metaphor for the ideal that the educational process is never truly complete, much like the process of paying back student loans. One old distinction remains, however: the new tower will house the school of business, a “high-tech” discipline (or “high-revenue,” which amounts to the same thing), while the fusty, low-revenue humanities will remain in the Auditorium Building.