Aesthetics of Catastrophe from Aric Mayer on Vimeo.

Aric Mayer marks the fifth anniversary of Hurricane Kartrina with his short film Aesthetics of Catastrophe. Mayer was on the scene in New Orleans in the immediate aftermath of the hurricane, and he took a series of hauntingly beautiful pcitures combining the genres of landscape and documentary photography. Maurice Blanchot, in The Writing of the Disaster

, says that disasters force one to place “stress upon minutiae” and recognize “the sovereignty of the accidental.” Mayer’s photographs situate us in a strange space between nature and culture, where it’s not easy to decide how one should feel because, even standing on a flooded street, one is always outside a disaster.

Outsiderdom of a different kind is on display at the Andrew Edlin Gallery in New York. The gallery’s summer exhibition presents the works of four artists virtually unknown in the US: a French artist known as A.C.M., the West African Abu Bakarr Mansaray, Rigo 23 of Portugal, and the Ukrainian artist Stas Volyazlovsky. Mansaray and Rigo create protest art, primarily through drawings. A.C.M.’s sculptures depict natural worlds that have not been shaken by disasters, but perhaps should be. Volyazlovsky is the most difficult to classify. His drawings range from folk art to political allegory, unified only by a furious tone. (Sample above left.) The exhibit runs through next Friday. 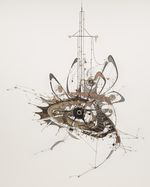 On Monday Larissa Bailiff will deliver a lecture on still another form of outsider art. She will discuss the MoMA exhibit, “Lee Bontecou: All Freedom in Every Sense,” which will close on September 6. Bontecou flourished in the Mad Men era, and her works from the early 1960s capture the underlying anxiety of the time. Bontecou went into a self-imposed exile for a long time, until an exhibit at the Chicago Museum of Contemporary Art in 2003-04 revived her career. The MoMA exhibit features a huge mobile of wire and porcelain (at left) Bontecou worked on for eighteen years while she refused to show her work.

Coming up in this space next week: the work of photographer Leslie Lyons and the new issue of MAS Context, which will include an essay by some guy named Richard Prouty.