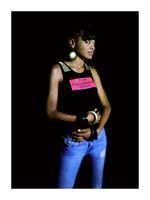 Walter Benjamin argued that art was changed forever when the invention of photography made possible the mechanical reproduction of images. For the first time an image could be reproduced exactly and endlessly. The image is ripped from its original and unique context, then placed in any number of different contexts in order to generate new meanings. For Benjamin, this meant the production of images, and thus the production of meaning, was no longer the exclusive province of the empowered classes.

But if mass-produced images have lost their aura, their uniqueness, then how does one construct authentic expression out of mass-produced objects? It’s no coincidence, Benjamin would have pointed out, that questions of authenticity have become more pressing with the advent of digital reproduction.

Photographer Leslie Lyons has spent her career exploring the interplay between the individual and the mass produced object. Her latest exhibition, “Instant Messaging: an analogue collection, examines tee shirt culture. Lyons found her subjects in New York City, New Orleans, Austin, Los Angeles and Louisville. She photographed hundreds of people wearing their tee shirts, asking each subject to explain the message and why he or she chose it. Some tee shirts express collective, conventionally political messages, such as an Iranian-American woman a shirt emblazoned with “Iran” and, below that, “I come in peace” in Arabic. 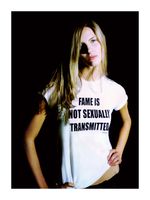 The positions of other subjects are more ambiguous, more expressive of Americans’ troubled relationship with mass culture. Take, for instance, the woman at left. Her tee shirt wields unadorned text against mass culture, Barbara Kruger style. The woman’s facial expression reflects the prickly message of her shirt–or is it the other way around? What came first–the sentiment or the message? Is the woman expressing some sort of enduring personal conviction, or is her choice of messages just as contingent and transient as any other consumer choice?

Whatever narratives we construct from Lyons’ portraits, her tee shirt images all share a sense of intimacy. She places her subjects against a black background, the light barely strong enough to distinguish them from the dark that threatens to envelope them. It’s as if her subjects have stepped forward to deliver a single message before disappearing into nothingness. We can only achieve authenticity in isolated moments, Lyons seems to be saying, and photography is the ideal medium to capture it.

Issues of authenticity and mass culture also appear in Lyons’ photographs of indie rock bands. Rock star publicity photos fall into well-defined genres, but Lyons puts her own stamp on her photographs. Her sessions with the Strokes, her first series of musician photos, resemble Mark Hayward’s photographs of the early Rolling Stones, with their subjects looking at once louche and Byronic, surrounded by the bric-a-brac of rock stardom. Lyons produced excellent photographs, and it’s little wonder that her photos of the band were widely circulated. However, Lyons wouldn’t develop her personal style until she started working with performers like Nada Surf, Sonic Youth, Jose Gonzalez, the Mooney Suzuki and James Murphy of LCD Soundsystem. These are all highly successful acts in the age of digital music, yet Lyons’ style recalls the intimate glamor of analogue music era, when musicians appeared radiant with popular success yet introspective enough to maintain artistic credibility. 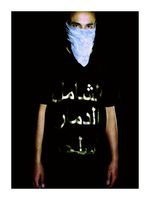 Lyons works in a variety of genres, from wedding photography to portraiture. Her photographs are unified by an analogue aesthetic from a time when the production of photographic images was slower and more labor-intensive. Her photograph of a masked woman wearing a tee short emblazoned with the words “Weapons of Mass Destruction” in Arabic is representative of her best work: you are confronted with an enigmatic message delivered by a stranger you will never see again, yet you sense the message is somehow solely for you.