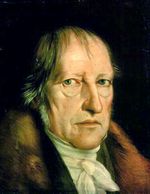 J.M. Bernstein continues his series on Hegel and current events in the New York Times‘ Stone column. His latest entry, “Hegel on Wall Street,” looks at the TARP program and its aftermath. Even though the bailout stank from Southampton to Malibu, Wall Street took the money and immediately returned to its old ways, untroubled by shame or increased regulation, while the rest of the country seethes.

What would Hegel have done? According to Bernstein, Hegel would have said, “a pox on both your houses, with an especially disfiguring and painful pox falling on Wall Street.” Hegel brushes aside any and all notions of free market individualism. Any person who acts in what he takes to be his “own self-interest, simply does not know what [he] is doing, and if [he] affirms that all men act in their own self-interest, [he] merely asserts that all men are not really aware of what acting really amounts to.” Purely self-interested action is a delusion. Then again, so is sanctimonious denunciation of the marketplace.

In “Virtue and the way of the world,” a section in The Phenomenology of Spirit, Hegel first takes on the moralist terminally outraged by the greed of the marketplace. The “way of the world” always defeats the moralist, which may be precisely the point. For each defeat, each outrage conducted by the greedy capitalist, Hegel says the moralist inflates his own sense of value by indulging in “pompous talk about what is best for humanity and about the oppression of humanity” and “incessant chatting about the sacrifice of the good.” Meanwhile, the Wall Street sharpie tells himself only the profit motive ever really succeeds, that anyone who thinks otherwise is a socialist weeny. The pursuit of profit is the truth of the marketplace, and it’s the marketplace that creates wealth for ordinary, hardworking Americans. Or so he tells himself and his congressman.

“Both are wrong because, finally,” Bernstein comments, “it is not motives but actions that matter, and how those actions hang together to make a practical world.” This is as close as you can get to a one-sentence summary of Hegel’s philosophy. Work determines consciousness, not the other way around. No matter what Oprah says, it’s a delusion to think that you can change your world by changing your mind. TARP-eating bankers may think they have pure motives, but they’ve built a system in which the pursuit of profit has been disconnected from the making of wealth. Hedge fund managers and big bankers make fortunes as the wealth of millions of Americans vanish.

These conditions are too one-sided to go on indefinitely–in Hegelian terms, to constitute a real world. Eventually, the self-interested person chews off his own leg in the pursuit of freedom. Meanwhile, the outraged moralist joins the Tea Party to accomplish, well, it’s not really clear what. Both sides are trapped in what Walter Benjamin called the dreaming collective, churning up images from the past (George Washington as a Jesus-obsessed super patriot, Adam Smith as the Moses of the profit motive) and projecting them onto the future, even as the disasters pile up.