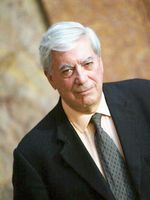 One of the problems with the Nobel Prize for literature is that the winner’s body of work is simultaneously elevated and reduced. If Shakespeare had been awarded the Nobel prize in, say, 1605, critics at the time would have said, “Hamlet has a powerful speech or two, but the main character’s dithering reveals how far the author’s creative powers have declined since his early masterpiece, A Comedy of Errors. His latest work shows him coasting on his reputation. Othello was a lame attempt at topicality, King Lear had a depressing ending, and Macbeth had no likable characters.”

Now it’s Mario Vargas Llosa turn under the withering spotlight of the Nobel Prize. While not every one of his novels is a masterpiece, there’s no doubt he’s a major figure in Latin American literature and he deserves the Nobel Prize. Like Gabriel Garcia Marquez, Carlos Fuentes, and a number of Latin American writers of his generation, Vargas Llosa is a public intellectual. This is a sharp contrast to American writers, who have ceded that ground to academics in the social sciences. In fact, if Cormac McCarthy had made a few appearances on Charlie Rose, he might have won the Nobel this year.

It’s hard to separate Vargas Llosa’s body of work from the excitement generated by the Boom and its politicized exoticism. The plot of Vargas Llosa’s recent novel The Bad Girl

was once summarized this way: Him: “I’ve loved you all of my life.” Her: “Then you are an idiot. But if you want to go down on me, be my guest.” Strip away the novel’s tone of courtly despair, a vestige of Boom style, and you’re left with a mildly unconventional love story. Still, The Bad Girl isn’t a bad novel. It was just written 40 years too late.

Vargas Llosa was never really a Magic Realist, although he’s sometimes lumped together with novelists of that strain. He’s at his best when he’s engaged in the politics and culture of South America. If you want an introduction to his work, start with The War of the End of the World

, about a revolt in Brazil, and Aunt Julia and the Scriptwriter

, a send-up of telenovelas and perhaps his most widely read novel in translation. His early Faulkneresque novel The Green House

is more geared toward a Latin American readership before all the Boom fuss. Then there’s Conversation in the Cathedral

, his attempt at a great Modernist novel. I once read all 608 pages of it in a week for a graduate seminar in the experimental novel, and I was stupefied. I don’t remember a single word of the novel, but I do recall how In class the professor barely uttered a word about the novel; instead, he told us about driving Vargas Llosa to JFK airport one evening before arguing, implausibly, that the entire novel was derived from James Joyce’s Ulysses, the only experimental novel, I suspect, he’d ever read cover to cover.