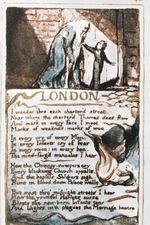 Mark Edmundson wonders what would have happened if the poet William Blake were alive today and walking the streets of an American city, composing a poem called “New York” or “Washington” rather than “London” (composed 1792). Instead of being outraged by the sight of children being stuffed down chimneys, as Blake memorably described in “London,” he would have been struck–maybe literally–by all the late model BMWs roaring through the streets, driven by well-fed people furious that their taxes are too high.

In Blakean terms, these people are stuck in Selfhood, which Edmundson defines as “individualist, reductive, and isolating.” Selfhood is a law professor complaining in his blog that his family can’t survive on $250,000 a year unless the Bush tax cuts are made permanent. The opposite of Selfhood involves recognizing and acting upon one’s dependence on others. It combines classical and Christian virtues–courage and compassion. In our republic of contempt, this pretty much never happens. Edmundson explains,

rich Americans plunder the nation, taking all they can get and then diving in for more. The Selfhood is so scared of the future, so isolated and loveless, that it is constantly grasping for security. Its fear makes it almost entirely without conscience. The only thing that might save the Selfhood is to surrender its aggressive individualism and seek solidarity with others through compassion—but this possibility is one that the Self cannot and will not understand. The Self believes that if it could only get to the next rung of wealth, the next tier of society, the next level of recognition and success, then all would be well.

Romantic poets have been caricatured as dreamy, impractical narcissists, but leave it to a Romantic poet to pinpoint exactly how self-interest can become the externalization of one’s own emptiness.